On Saturday, July 18, 2015 the Virginia Flaggers showed some more of their racism.

In the video attached to this report, at about the 1:20 point, you can see some members of the flaggers led by Susan Hathaway in singing the former state song of Virginia, “Carry Me Back to Old Virginny.” What’s racist about that?

Composed by James Bland in 1878, the song was adopted as the Virginia State Song in 1940, during the Jim Crow period.

Here are the lyrics:

L. Douglas Wilder, while Governor of Virginia, led the way to jettison the song due to its lyrics that include a racist term for African-Americans and its evoking images of slavery. In 1997 it was removed as Virginia’s State Song, being designated as the “State Song Emeritus.”

There are lyrics that replace the racist language, which were adopted by the Virginia Legislature in 1994:

The Official Virginia State Song is now “Our Great Virginia.”

Britni McDonald of NBC 12 reported on her Facebook page: 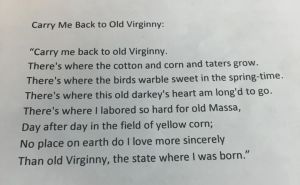 And did you notice the caravan of cars with the racist rag displayed?

Kind of reminds you of this, doesn’t it? 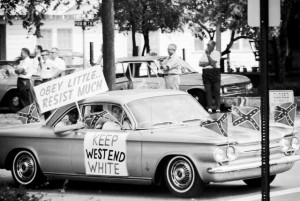