The Purpose of the Past 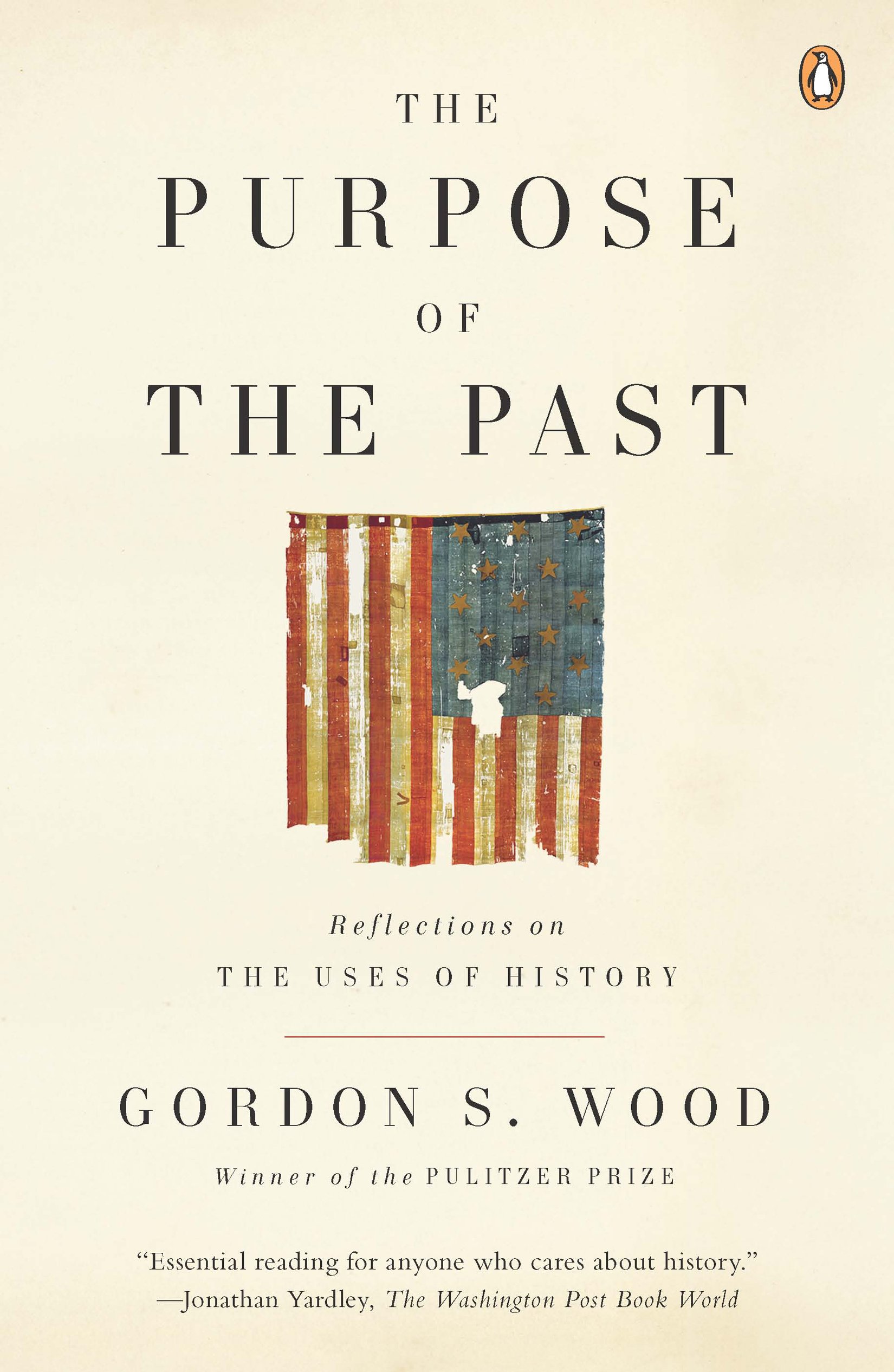 This book by Professor Gordon S. Wood, published in 2008, is a compilation of several book reviews he wrote, primarily for The New York Review of Books. In his introduction he writes, “During the past several decades we have experienced the culmination of what began over forty years ago–what one historian has called ‘a historiographical revolution.’ Since the 1960s new people have entered the profession and new subjects have been opened up for research. Instead of writing about statesmen, generals, diplomats, and elite institutions, historians began concentrating on ordinary folk and marginal people: the poor, the oppressed, and the silent. By the 1970s this new social history of hitherto forgotten people had come to dominate academic history writing. Although some historians continued to write political and institutional histories, most began writing about everything else but politics. In fact, there is scarcely an aspect of human behavior that historians over the past generation have not written about–from divorce to dying, from the consumption of goods to child rearing. Historians began delving into the most private, subjective, and least accessible aspects of the past, including marriage, sexual relations, and child abuse.” [p. 2]

This led to a divide between what academic historians were working in and what the general public wanted to read. “Several indices revealed that the American people were becoming less and less interested in the kind of social history academics were teaching and writing. From 1970-71 to 1985-86, years when there was a boom in student enrolments, the number of history degrees granted by all American colleges and universities declined by two-thirds, from 44,663 to 16,413. A drop in membership of the American Historical Association in the 1970s and 1980s was itself a sign of this weakening interest in history.” [p. 3] Or at least the history the academic world was producing. Professor Wood continues, “The evidence compiled by Peter Novick in his That Noble Dream, published in 1988, reinforced the impression of a decline in academic history writing. Novick argued that the historical profession during the 1970s and 1980s seemed to have lost a unified sense of purpose, without a clear sense any longer of America’s role in history, the discipline seemed to be coming apart. ‘In no other field was there such a widespread sense of disarray; in no other discipline did so many leading figures express dismay and discouragement at the current state of their realm.’ Many historians tended to see themselves as simply congeries of specialists solving technical problems and talking mostly to one another. At the same time Novick was reaching his pessimistic conclusions, some historians began reacting against the disarray and calling for a return to narrative, to the kind of storytelling that, presumably, history was always noted for. Still others, however, wanted no part of a return to a traditional grand narrative, which they associated with the sort of history writing that had kept women and minorities out of the national story. They wanted instead to promote multicultural diversity, and discovered they could bet do so by transforming social history into cultural history. Social history tended to be structurally descriptive and not ideally suited to the historians’ desire to see people in all their variety and distinctiveness. By contrast, cultural history offered a way of penetrating through the large-scale economic and social structures of society into the many different identities and cultures of people in the society. Although the new cultural history tended to increase the fragmentation and disarray, it soon came to dominate the profession. By the late 1980s most historians in the United States had stopped compiling computer printouts and invoking Pearson correlation coefficients and had begun concentrating almost exclusively on cultural history, focusing especially on issues of race and gender.” [pp. 3-4]

Professor Wood is obviously not very happy with the more modern histories. “In the 1950s academic historians such as Richard Hofstadter, Allan Nevins, Eric Goldman, Daniel Boorstin, and C. Vann Woodward certainly wrote history that appealed to both academic and general readers. That is much less true today. Consequently, popular historians who have no academic appointments, such as David McCullough, Walter Isaacson, Ron Chernow, Thomas Fleming, and Stacy Schiff, have successfully moved in to fill the void left by the academic historians preoccupied by issues of race, gender, and multiculturalism. The result of all this postmodern history, with its talk of ‘deconstruction,’ ‘decentering,’ ‘textuality,’ and ‘essentialism,’ has been to make academic history writing almost as esoteric and inward directed as the writing of literary scholars. This is too bad, since history is an endeavor that needs a wide readership to justify itself.” [p. 6]

Speaking of the justification for studying and writing about history, Professor Wood says, “I don’t believe that history teaches a lot of lessons to guide us in the present and future. It is not, as the eighteenth century thought, ‘philosophy teaching by example.’ Yet by disparaging the capacity of history to teach lessons, I don’t mean to suggest that studying the past can’t teach us anything. If history has nothing to say to us, then it wouldn’t make much sense to study or teach it or read about it at all. History is important to us, and knowledge of the past can have a profound effect on our consciousness, on our sense of ourselves. History is a supremely humanistic discipline: it may not teach us particular lessons, but it does tell us how we might live in the world.” [p. 6] As Professor Wood continues, ” ‘True history,’ [English historian J. H. Plumb] wrote, was basically ‘destructive’; for by its very nature it dissolves those simple, structural generalizations by which our forefathers interpreted the purpose of life in historical terms.’ Its role was to eliminate those simple generalizations and ‘to cleanse the story of mankind from those deceiving visions of a purposeful past.’ During the past generation historical scholarship apparently has fulfilled its destructive role only too well, and not just in America. As the historian Carl Schorske pointed out, “History, conceived as a continuous nourishing tradition,’ no longer had the same meaning for society, or at least not for that part of the society that read academic history.” [pp. 7-8] At this point, Professor Wood distinguishes between history and memory/heritage. “Memory, or what David Lowenthal has called ‘heritage,’ is necessary for any society. Heritage may be a worthless sham, its credos fallacious, even perverse; but, writes Lowenthal, ‘heritage, no less than history, is essential to knowing and acting.’ It fosters community, identity, and continuity, and in the end makes possible history itself. ‘By means of it we tell ourselves who we are, where we came from, and to what we belong.’ We thus tamper with our heritage, our memory, at our peril.” [p. 8]

According to Professor Wood, “I am not suggesting that history has no connection to the present; I am not advocating that history become antiquarianism. Quite the contrary. It is natural for historians to want to relate the past to the needs and problems of the present. Indeed, historical explanation is only possible because we today have different perspectives from those of the historical participants we are writing about. Most new historical investigations begin with an attempt to understand the historical circumstances that lie behind a present-day problem or situation It is not surprising that our best recent work on the origins and nature of slavery coincided with the civil rights movement of the 1960s. Or that our recent rich investigations into the history of women grew out of the women’s movement of the past three or four decades. This is as it should be: the problems and issues of the present should be the stimulus for our forays into the past. It is natural for us to want to discover the sources, the origins, of our present circumstances.” [pp. 9-10]

We also learn, “To possess a historical sense does not mean simply to possess information about the past. It means to have a different consciousness, a historical consciousness, to have incorporated into our minds a mode of understanding that profoundly influences the way we look at the world. History adds another dimension to our view of the world and enriches our experience. Someone with a historical sense sees reality differently: in four dimensions. If it is self-identity that we want, then history deepens and complicates that identity by showing us how it has developed through time. It tells us how we got to be the way we are. And that historically developed being is not something easily manipulated or transformed.” [pp. 11-12]

The reviews Professor Wood chose for this book all illustrate various aspects of the craft of history in addition to providing us historical details and providing us a reading list of books. This makes the book an excellent primer for aspiring historians to learn about the field and to learn how historians operate. It also gives us leads on other book to read, primarily running from Colonial America through the Revolutionary War and into the Early Republic. While there are reviews of only one book directly on the Civil War era, John Patrick Diggins’s On Hallowed Ground: Abraham Lincoln and the Foundations of American History, and two books specifically on slavery, Lawrence Goldstone’s Dark Bargain: Slavery, Profits, and the Struggle for the Constitution and Robin Einhorn’s American Taxation, American Slavery, there is much in this book a serious student of the Civil War can use to their intellectual profit, even from those reviews of books not directly dealing with the Civil War era. Especially for students of history in general, I can highly recommend this book.