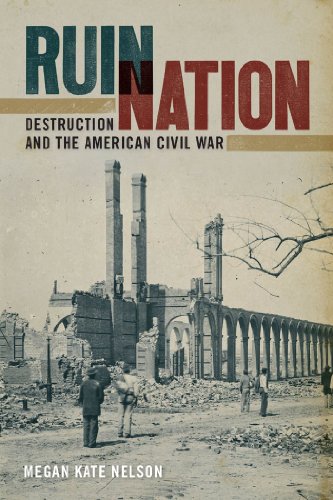 This book by Dr. Megan Kate Nelson delves into various types of destruction done in the Civil War. In telling us about her project, she writes, “In this study, I conceive of the ‘ruin’ as a material whole that has violently broken into parts; enough of these parts must remain in situ, however, that the observer can recognize what they used to be. This interplay between the whole past and the fragmented present of Civil War ruins captivated many observers, often giving them an unsettling (but not entirely unpleasant) sense of temporal dislocation. Northrop and other soldiers looked on the ruins of southern cities and felt their ‘dreamy, ancient’ air, imagining Pompeii and Thebes. Ruins seemed to capture the moment of transformation from one time to another, from one material form to another. This process of change–ruination–was a common theme in antebellum literature (the bildungsroman) and art (the polyptych, a narrative told in multiple images). It was also evocative during a cultural moment when Americans’ sense of time and its measurement was changing; most antebellum Americans observed both natural and mechanized time, looking to the sun and the stars in addition to watches and town and plantation clocks to situate themselves at specific moments of day and night. The ruin’s ability to embody both temporal and material change during the Civil War provoked a torrent of commentary in letters, diaries, battle reports, newspaper articles, photographs, and illustrations. Out of the destruction of their own landscape–and in its reconstruction both in material reality and in words and images–northerners and southerners alike created a new national narrative.” [pp. 2-3]

Dr. Nelson looks at four types of ruins: cities, houses, trees [forests] and men [wounded and killed]. She identifies some elements these types shared: “First, they all reveal the basic adage that war’s purpose is to destroy, to obliterate the material and human resources of the enemy. But war’s purpose is also to create, often out of precisely the ruins it requires. War unmakes as well as it makes–and remakes–space. War creates new landscapes, such as the vast camps that Union and Confederate soldiers built during the cold southern winters. It also gives rise to new technologies that attempt to rebuild or replace what has been lost, such as the prosthetics that made veteran amputees whole again. War also compels its participants to produce words and images, both of which construct narratives of the conflict and make sense of its events. In a more abstract sense, war produces feelings of natural pride–in this case, powerful emotions related to both the Union and the Confederacy as well as to the United States. This tension between what war destroys and what it creates is embodied in ruins and makes them such a dynamic cultural force and the centerpiece of the national wartime narrative. Second, all four types of the ruins discussed in this book were ephemeral. Within a generation of their production, most of them had disappeared from the American landscape. City buildings and homes were rebuilt or their materials were repurposed as southerners got on with the work of literal reconstruction. The acres of stumps and tree shards that soldiers created on the march, in camp, and in battle grew over with successive species. The men who fought lived the longest; veteran amputees survived into the twentieth century, but then they, too, were gone. What are left are merely traces, not ruins: stone foundations, a lone chimney here or there, grassy mounds marking former earthworks fragments of bone in a medical cabinet.” [p. 4]

The first ruined town she identifies for us is Hampton, Virginia, burned by the confederates themselves at the order of John B. Magruder. She says they did so because they were “convinced they could not keep it from falling to Union soldiers stationed at Fortress Monroe.” [p. 14] She writes, “In so doing, Confederates created the first urban ruins of the war, thereby shaping the debate about the nature of warfare and the debris it created.” [p. 14] There was another reason as well. Hampton had become a haven for escaped slaves after the whites of the town had abandoned it. As Dr. Nelson tells us, “By the time Magruder set fire to the town, it was already for all intents and purposes a contraband camp, the burning destroyed the buildings that runaway slaves had previously seized for themselves.” [p. 24]

Another ruined town she identified is Chambersburg, Pennsylvania, burned by the confederates in 1864. “Southerners, despite their protestations against Union siege tactics, had never been averse to destroying cities–as long as they were the enemy’s. Tennessee Confederate Annie Maney conveyed her confidence in her new nation and approved of its use of hard-war tactics. ‘I only pray God may be with us,’ she wrote in May 1861, ‘to give us strength to conquer them, to exterminate them, to lay waste to every Northern city, town and village, to destroy them utterly.’ Jefferson Davis echoed Maney’s sentiments in an 1861 speech in Stevenson, Alabama, vowing that ‘we will carry war where it is easy to advance–where food for the sword and torch await our armies in the densely populated cities.’ Northern troops might burn southern crops, but ‘we can raise them as before, while they cannot rear the cities which took years of industry and millions of money to build.’ The editors of the Richmond Enquirer similarly argued that visiting urban warfare upon northern towns or villages would result in more impressive and costly destruction than such a strategy would reap in the South. While southern towns and villages were scattered and sparsely populated, ‘the numerous towns and villages of the enemy and his thickly peopled country, will pay more heavily.’ ” [pp. 33-34]

The book has some great insights, looking at the war from an entirely different angle. That makes it an interesting and original contribution to the scholarship of the war. The military history portions could use some bolstering, however. For example, on page 144 she writes, “Because Confederate general Robert E. Lee’s Army of Northern Virginia was outnumbered in the eastern theater, he maneuvered most Union generals into meeting him in forests, where Federals’ numbers would not be an advantage.” On page 146 she says, “As a result of Lee’s tactics and the speed that smaller numbers provided the Army of Northern Virginia, Confederates fought Union forces in a series of forest battles, most famously during the Peninsula campaign (1862) and the battles of Chancellorsville (1863) and the Wilderness (1864).” It’s true Lee was outnumbered, and it’s true fighting the dense areas of the Wilderness negated the Federal advantage in numbers and in artillery, but Lee didn’t maneuver these generals into fighting in densely treed areas. Hooker and Meade planned to go there and it was their decision to stay in those areas for those battles. Lee was not in command of the Army of Northern Virginia during the Peninsula campaign. He took command at the outset of the Seven Days, and he didn’t maneuver McClellan either, but rather attacked McClellan where he found the Army of the Potomac.

On page 162 Dr. Nelson writes, “The evolving weaponry of the American Civil War ensured that northern and southern soldiers could shoot bullets, shot, and shell faster and more accurately than in previous wars.” While that is technically true, as Paddy Griffith and Earl Hess have demonstrated, the rifled weapons may have been more accurate but they weren’t to blame for the casualty numbers. Most fighting was still done within smoothbore range, where the smoothbores were as deadly as the rifled weapons.

Still, those errors were minor within the context of the book and didn’t detract at all from Dr. Nelson’s thesis. I still found the book to be an interesting account that gave us insightful observations. In her conclusion she wrote, “As northern and southern troops move through the landscapes of the South during the Civil War, they transformed cities, homes, forests, and bodies into ruins. It was a shared experience, a national project. Sometimes they were ordered to destroy these things by commanders convinced that hard-war strategies would bring the conflict to a close. Other times, the destruction arose from anger, vengeance, greed, or a desire for self-preservation. In all of these cases, soldiers used both newly developed and increasingly accurate and long-range killing technologies (torpedoes, mines, rifles, and artillery) [Mines, of course, were not new. Engineers knew how to dig them and how to pack them with explosives and had known these things since the Middle Ages. We’ve already discussed the rifled weapons] and the most basic of destructive implements (fire, axes, and hands) to create these ruins. And as they did so, these men took fragments of the ruins and saved myriad other material objects as mementos of their experiences. These objects, many of them mundane, were viewed, described, collected, redistributed, transported, displayed, traded, and cherished, ultimately finding their way from parlors to museum display cases. To soldiers and civilians, these objects came to embody the war and its histories. This fetishizing of evocative, mnemonic objects–and the simultaneous and rapid erasure of Civil War ruins within a generation of the war’s end–reveals a tendency in American culture to consume rather than directly confront the past.” [p. 229]

I enjoyed reading this different take on the destruction wrought in the war. I can highly recommend it for student of the war.