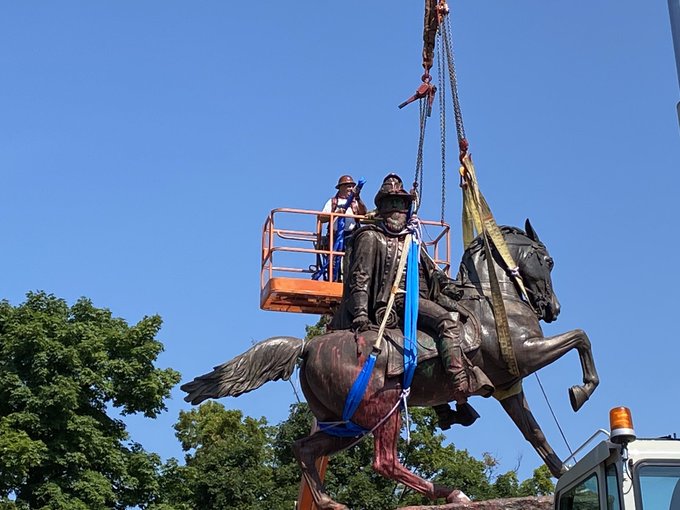 The City of Richmond, Virginia removed the James Ewell Brown Stuart monument today. This story tells us, “Crews went up in a cherry picker with power tools on Tuesday to begin separating the 22-foot-high bronze equestrian statue from its base. Then, they’ll strap it in a harness and use a crane to lift it onto a truck to be driven away. The Stuart statue was installed on Richmond’s Monument Avenue in 1907, a time when white leaders across the South sought to glorify the ‘lost cause’ of the Civil War and suppress attempts by Black people to assert their equality. It depicts James Ewell Brown (JEB) Stuart, commander of the Cavalry Corps of Robert E. Lee’s Army of Northern Virginia, in full uniform with a sword at his side, turned east as his horse faces north, atop a granite base. Inscriptions on the base of the statue are filled with accolades to Stuart, who was fatally wounded by a Union soldier and died at age 31 on May 12, 1864. ‘He gave his life for his country and saved his city from capture,’ reads one inscription. The Stuart monument is one of several targeted by protesters in Richmond since the police killing of George Floyd in Minneapolis prompted nationwide demonstrations. Police declared an unlawful assembly on June 21 after protesters tried to pull it down with ropes. Mayor Levar Stoney, citing his emergency powers on July 1, ordered the removal of all city-owned Confederate statues. Stonewall Jackson’s likeness was removed that day, followed by a statue of Naval officer Matthew Fontaine Maury. Stoney has said the statues will be placed in storage while the city seeks public input on what to do with them. Stuart’s has been the last major statue left standing, other than a massive monument to Gen. Robert E. Lee that’s on state land. The Lee monument also is slated for removal, but that has been blocked at least temporarily by an injunction issued in one of several lawsuits filed after Gov. Ralph Northam ordered its removal last month.” 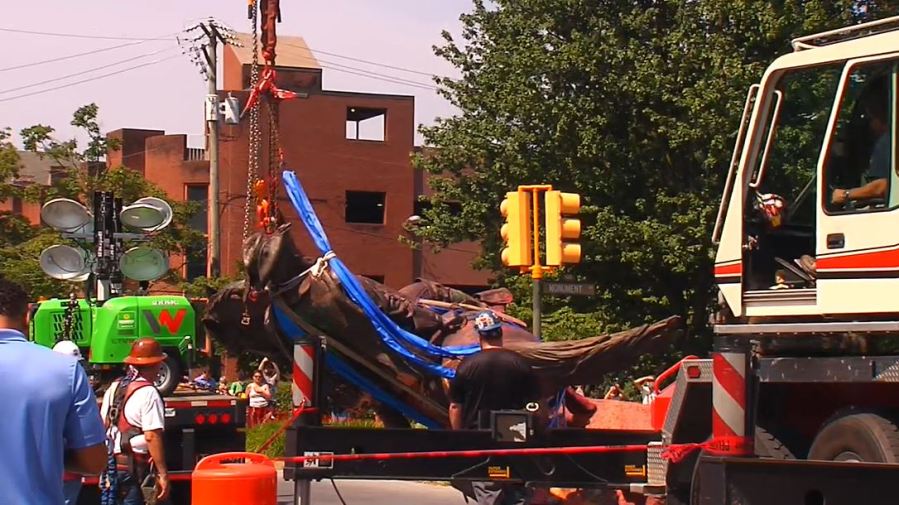 JEB Stuart statue loaded onto a flatbed. Photo by 8News.

This article tells us, “By 11:00 a.m. the statue was down and being loaded onto a flatbed.”

Also from Virginia, this article says Governor Ralph Northam urged school leaders across the state to remove names of confederates from their schools. It says, “Gov. Ralph Northam wants school systems across Virginia to change the names of schools honoring Confederate leaders. In a July 6 letter to the heads of school boards in the state, Northam says the names and mascots have a ‘traumatizing impact on students, families, teachers and staff of all backgrounds.’ ‘When our public schools are named after individuals who advanced slavery and systemic racism, and we allow those names to remain on school property, we tacitly endorse their values as our own,’ Northam wrote. ‘This is no longer acceptable.’ … Community members across the state have called for Confederate school names to be changed as part of the racial reckoning. Virginia’s 14 Confederate school names are the second-most in the U.S., according to 2019 data from the Southern Poverty Law Center. According to Education Week, at least 194 schools in 18 states were named for men with Confederate ties as of last month. Some school boards in Virginia already have said they will change the names, which they have the power to do. The Fairfax County School Board voted last month to rename Robert E. Lee High School, with the body deciding on a new name July 23 in preparation for the upcoming school year. Among the possible new names: U.S. Rep. John Lewis, D-Ga., former president Barack Obama, and Latino civil rights activist Cesar Chavez, among others. ‘Confederate values are ones that do not align with our community,’ School Board Vice Chairwoman Tamara Derenak Kaufax said during a meeting last month. ‘I have seen the pain and the hurt that these names have inflicted on friends and colleagues and community members.’ ”

The article also tells us, “The Prince William County School Board renamed a high school and middle school honoring Stonewall Jackson last month for people in the community. In Loudoun County, school leaders opted to remove the ‘Raiders’ mascot from Loudoun County High School because it represented a Confederate colonel’s troops. Locally, the Richmond School Board is considering renaming Binford Middle, John B. Cary Elementary and Ginter Park Elementary, all schools with Confederate ties. The body renamed J.E.B. Stuart Elementary for Obama in 2018 and earlier this year axed Founding Father George Mason’s name from a rebuilt school over his slave ownership. The Stuart-to-Obama renaming cost the school system an estimated $26,000, which private donors and a T-shirt sale helped pay for. In his letter, Northam said money shouldn’t be an issue for renaming. ‘The financial costs of changing school names are minimal compared to the generations that suffered through American slavery, the Confederacy, the Jim-Crow era, massive resistance, and contemporary manifestation of systemic racism, like the school to prison pipeline,’ Northam wrote. The most contentious renaming process in the state has been in Hanover County, who the county’s NAACP chapter is suing over the names of Lee-Davis High School (Confederates) and Stonewall Jackson Middle School (Rebels). The body voted 5-2 in 2018 to keep the names. A vote appeared imminent June 23, with the board’s clerk announcing after a roughly two-hour closed session that the board planned on amending the agenda and ‘take action’ on the names. Instead, the body voted to adjourn the meeting with no vote. School Board Chairman John Axselle said Tuesday that the board can’t comment because of the lawsuit. The NAACP is appealing a federal judge’s dismissal of the suit earlier this year. ‘As always, the School Board respects, values, and cares about every student and will continue to focus on providing them with the best educational opportunities possible,’ Axselle said in a statement. The board is set to meet again July 14. An agenda for that meeting has yet to be published.”

Perhaps his call has been heard. This article tells us, “James Madison University’s Board of Visitors unanimously voted to remove the Confederate leader names of Jackson., Ashby and Maury from their halls on campus. The changes will be effective immediately. Temporary names will be given to the halls this upcoming academic year.”

According to this article, Stonewall Jackson’s great-great grandson approved of last week’s removal of his ancestor’s statue. “In Denton, Texas, 1,300 miles away from where a crowd was gathered to watch the removal of the Stonewall Jackson statue, Jackson’s great-great-grandson’s phone was buzzing with text messages from friends watching workers saw off the base of the statue. ‘I’m very much cheering on from afar,’ said William Jackson ‘Jack’ Christian, a lecturer in the English department at the University of North Texas who was home with his 3-week-old daughter on Wednesday when he heard the news. ‘I think removing racist imagery and symbols – whether it’s statues or a Confederate flag or school names – is a first step toward addressing a racist past and hopefully enacting a more just future.’ Christian, 41, said he was raised in Bon Air with both ‘reverence and skepticism’ for his namesake. He was taught that Jackson committed good deeds, such as educating enslaved people in violation of state law. As an adult, his views sharpened. ‘He still had a white supremacist viewpoint that he went to war to protect,’ Christian said. He and his brother wrote Richmond Mayor Levar Stoney asking for the monuments to come down in 2017 after a white supremacist plowed into a crowd in Charlottesville, killing Heather Heyer. The man had come to protest against the removal of a prominent Confederate monument in the city’s downtown. ‘I noticed that when people of color or women have voiced the opinions we voiced, they face far more criticism,’ he said of the response to their call for action. ‘I think we definitely felt like we had a responsibility to say something, but it was also part of our privilege to get to say something; to weigh in as opposed to just being outraged.’ Christian said he hopes no public money is spent displaying and contextualizing the piece. He credited steady activism and a wave of recent protests with pushing officials to a decision. ‘I would be happy with [the statue] being locked away and not displayed anywhere,’ he said. ‘I don’t think it can be a symbol for everybody.’ ”

As this article tells us, workers removed the “Fame” monument in Salisbury, North Carolina. “The Confederate monument ‘Fame’ at the intersection of West Innes and Church streets was moved Monday night and early Tuesday. … The United Daughters of the Confederacy, which owns the statue and received an easement to piece of property it sits on, agreed to a plan to move the statue. The city is paying for the move and the Historic Salisbury Foundation is overseeing privately raised funds for improvements to the cemetery. The statue has been a political flashpoint for decades, but events during recent Black Lives Matter protests pushed City Council to declare the statue a public safety issue. In one instance, a Kernersville man fired shots into the air during a peaceful protest. In another, police used tear gas and riot gear to disperse protesters. By 1 a.m. Tuesday, crews had removed all parts of the monument and had placed it on a flatbed trailer.”

Grant historian Nick Sacco penned this essay in response to the Grant monument toppling in San Francisco. As always, it’s excellent. Nick points out how Grant’s relationship to slavery was more complex than what one could condense into a sound bite or a bumper sticker. He also discusses Grant’s relationship to civil rights for African Americans as well as Grant’s Indian policy, both of which are also examples of the man’s complexity. He concludes his essay, “Finally, a word about public monuments in general is warranted. While the seemingly indiscriminate vandalizing of monuments (which now includes the 54th Massachusetts Memorial, abolitionist Hans Heg, and even guitar legend Stevie Ray Vaughn) raises important questions about the ways Americans choose to remember their past, it might be fair to ask whether erecting new monuments is an appropriate course moving forward. President John Quincy Adams once stated that ‘Democracy has no monuments. It strikes no medals; it bears the head of no man upon its coin; its very essence is iconoclastic.’ Monuments, in Adams’ view, were undemocratic, coercive tools of monarchy. These troublesome icons demanded unquestioned fealty and promoted a version of history as simple hero-worship. Are there better ways to utilize these public spaces in the future? In public history, practitioners regularly preach the importance of highlighting multiple historical perspectives, ‘sharing authority’ with communities in telling diverse stories, and thinking critically about the past. Most monuments fail to achieve these lofty goals. Regardless of how one might personally view Ulysses S. Grant’s legacy, most of the monuments erected in his honor probably do a poor job of telling the full story. While it is more than fair to be concerned about the future of public monuments, discussions about who, how, and why we honor certain historical figures must continue. Local communities should be empowered to make decisions for themselves about who they choose to honor. And perhaps most importantly, these conversations must be accompanied with calls for increased funding to promote the teaching of history in public education, historical sites, and museums around the United States.”

← What Should Be Done With Mount Rushmore?
Is the South Finally Ridding Itself of the Leftover Confederate Garbage? →