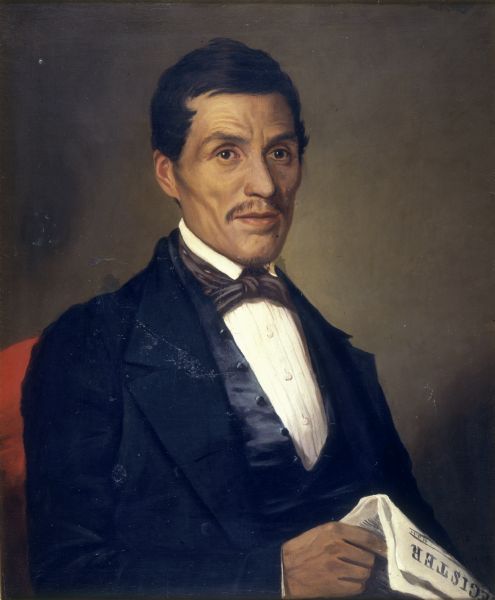 It may appear to those whom I have the honor to address a singular taste for me, an Indian, to take an interest in the triumphal days of a people who occupy, by conquest or have usurped, the possessions of my fathers and have laid and carefully preserved a train of terrible miseries to end when my race ceased to exist.

But thanks to the fortunate circumstances of my life I have been taught in the schools and been able to read your histories and accounts of Europeans, yourselves and the Red Man; which instruct me that while your rejoicings today are commemorative of the free birth of this giant nation, they simply convey to my mind the recollection of a transfer of the miserable weakness and dependence, of my race from one great power to another.

My friends, I am getting old and have witnessed for many years your increase in wealth and power while the steady consuming decline of my tribe admonishes me that their extinction is inevitable. They know it themselves and the reflection teaches them humility and resignation, directing their attention to the existence of those happy hunting grounds which the Great Father has prepared for all his red children.

In this spirit, my friends, as a Muh-he-con-new, and now standing upon the soil which once was and now ought to be the property of this tribe, I have thought for once and certainly the last time I would shake you by the hand and ask you to listen for a little while to what I have to say.

Councils for this object especially had been held. Here for the space of two moons, the stores of memory were dispensed; corrections and comparisons made and the results committed to faithful breasts to be transmitted again to succeeding posterity.

Many years after, another and last council of this kind was held; and the traditions reduced to writing, by two of our young men who had been taught to read and write in the school of the Rev. John Sargent of Stockbridge, Mass. They were obtained in some way by a white man for publication, who soon after dying, all trace of them became lost. The traditions of the tribe, however, have mainly been preserved, of which I give you substantially, the following:

A great people from the northwest crossed over the salt water, and after long and weary pilgrimage, planting many colonies on their track, took possession of and built their fires upon the Atlantic coast, extending from the Delaware on the south to the Penobscott on the north. They became in process of time different tribes and interests; all, however, speaking one common dialect.

This great Confederacy, Pequots, Penobscot, and many others (Delawares, Mohegans, Manses, Narragansetts) held its councilfires once a year to deliberate on the general welfare.

Patriarchal delegates from each tribe attended, assisted by the priests and the wise men, who communicated the will and invoked the blessing of the Great and Good Spirit. The policies and decisions of this council were everywhere respected, and inviolably observed. Thus contentment smiled upon their existence and they were happy.

Their religion communicated by priest and prophet, was simple and true.The manner of worship is imperfectly transmitted; but their reverence for a Great Spirit, the observance of feasts each fear, the offering of beasts in thanksgiving and atonement is clearly expressed.

They believed the soul to be immortal—in the existence of a happy land beyond the view, inhabited by those whose lives had been blameless. While for the wicked had been reserved a region of misery covered with thorns and thistles, where comfort and pleasure were unknown. Time was divided into years and seasons; twelve moons for a year, a number of years by so many winters.

The tribe to which your speaker belongs and of which there were many bands, occupied and possessed the country from the seashore at Manhattan to Lake Champlain. Having found the ebb and flow of the tide, they said: “This is Muh-he-con-new,” “Like our waters which are never still.” From this expression and by this name they were afterwards known, until the removal to Stockbridge in the year 1630.

Housatonic River Indians, Mohegans, Manhattans, were all names of bands in different localities, but bound together as one family by blood and descent.

At a remote period, before the advent of the European their wise men foretold the coming of a strange race from the sunrise, as numerous as the leaves upon the trees, who would eventually crowd them from their fair land possessions. But apprehension was mitigated by the knowledge and belief at that time entertained, that they originally were not there, and after a period of years they would return to the west from which they had come. And they moreover said all Red Men are sprung from a common ancestor, made by the Great Spirit from red clay, who will unite their strength to avert a common calamity. This tradition is confirmed by the common belief, which prevails in our day with all the Indian tribes; for they recognize one another by their color, as brothers and acknowledge one Great Creator.

Two hundred and fifty winters ago, this prophecy was verified and the Muh-he-con-new for the first time beheld the paleface. Their number was small, but their canoes were big.

In the select and exclusive circles of your rich men of the present day I should encounter the gaze of curiosity, but not such as overwhelmed the senses of the Aborigines, my ancestors. Our visitors were white and must be sick. They asked for rest and kindness; we gave them both. They were strangers, and we took them in; naked and we clothed them.

The first impression of astonishment and pity was succeeded by awe and admiration of superior intelligence and address.

A passion for information and improvement possessed the Indians. A residence was given—territory offered—and covenants of friendship exchanged.

Your written accounts of events at this period are familiar to you, my friends. Your children read them every day in their school books; but they do not read—no mind at this time can conceive, and no pen record, the terrible story of recompense for kindness, which for two hundred years has been paid the simple, guileless Muh-he-con-new.

I have seen much myself—1 have been connected with more—and I tell you I know all. The tradition of the wise men is figuratively true that our home at last will be found in the west; for another tradition informs us that far beyond the setting sun, upon the smiling happy lands, we shall be gathered with our fathers, and be at rest.

Promises and professions were freely given and ruthlessly and intentionally broken. To kindle your fires was sought as a privilege; and yet at that moment you were transmitting to your kings intelligence of our possessions, “by right of discovery,” and demanding assistance to assert your hold.

They have been victims to vice and disease, which the white men imported. Smallpox, measles and firewater have done the work of annihilation. Divisions and feuds were insidiously promoted between the several bands. They were induced to thin each others ranks without just cause; and subsequently were defeated and disorganized in detail.

It is curious, the history of my tribe, in its decline, in the last two centuries and a half. Nothing that deserved the name of purchase was made. From various causes, they were induced to abandon their territory at intervals and retire farther inland. Deeds were given indifferently to the government by individuals, for which little or no compensation was paid.

The Indians were informed, in many instances, that they were selling one piece of land when they were conveying another and much larger limits. Should a particular band, for purposes of hunting or fishing, for a time leave its usual place of residence, the land was said to be abandoned,and the Indian claim extinguished. To legalize and confirm titles thus acquired, laws and edicts were subsequently passed, and these laws were said then to be, and are now called, justice.

Oh, what mockery to confound justice with law! Will you look steadily at the intrigues, bargains, corruptions and log rollings of your present legislatures, and see any trace of justice? And by what test shall be tried the acts of the colonial courts and councils?

Let it not surprise you, my friends, when I say that the spot upon which I stand has never been rightly purchased or obtained. And by justice, human and Divine, is the property of the remnant of the great people from whom I am descended. They left it in the tortures of starvation and to improve their miserable existence; but a cession was never made, and their title was never extinguished.

The Indian is said to be the ward of the white man, and the negro his slave. Has it ever occurred to you, my friend, that while the negro is increasing and increased by every appliance, the Indian is left to rot and die before the inhumanities of this model republic?

You have your tears and groans and mobs and riots for the individuals of the former, while your indifference of purpose and vacillation of policy is hurrying to extinction whole communities of the latter.

What are the treaties of the general government? How often and when has its plighted faith been kept? Indian occupation is forever next year, or one removal follows another, or by the next commissioner, more wise than his predecessor, repurchased, and thus your sympathies and justice are evinced in speedily fulfilling the terrible destinies of our race.

My friends, your Holy Book, the Bible, teaches us that individual offenses are punished in an existence—when time shall be no more—and the annals of the earth are equally instructive that national wrongs are avenged, and national crimes atoned for in this world to which alone the conformation of existence adapts them. These events are above our comprehension, and for a wise purpose; for myself and for my tribe i ask for justice—I believe it will sooner or later occur, and may the Great Spirit enable me to die in hope

← What to the Slave is the Fourth of July?
Armed Pro-Fascism Racists Descend On Gettysburg July 4, 2020 →