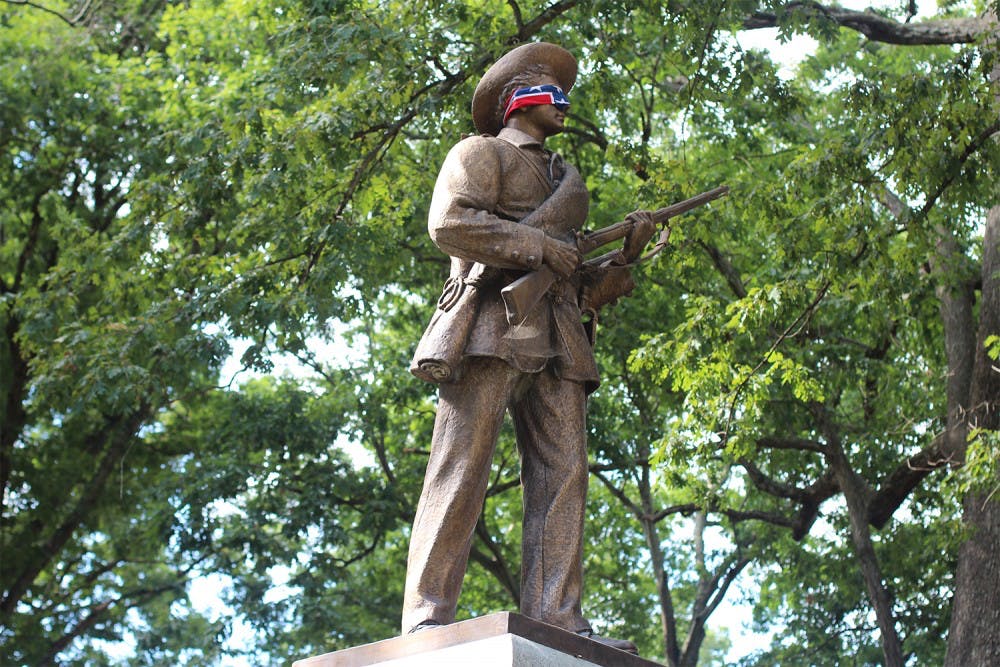 From the article. Silent Sam blindfolded by a Confederate flag in 2015. The statue was recently given to Sons of Confederate Veterans.

This article from The Daily Tar Heel tells us, surprise, surprise, the SCV group behind the multimillion-dollar bribe from the University of North Carolina has been dishonest with regard to taxes. The article tells us, “For years, the pro-Confederate group that the UNC System dealt $2.6 million has been violating federal tax laws, operating a political action committee in violation of its tax-exempt status and facilitating political donations through illegal means, according to numerous individual first-hand accounts, a slew of internal communications provided to The Daily Tar Heel and multiple expert legal opinions.”

As already reported, “The North Carolina Division Sons of Confederate Veterans Inc. struck a pair of backdoor deals last November with UNC System Board of Governors members. A predetermined lawsuit and settlement gave the group Silent Sam and $2.5 million in UNC System money for the Confederate monument’s ‘preservation and benefit.’ A week previous, the system paid $74,999 to the SCV for an agreement to limit its display of Confederate symbolism on UNC System property.”

As to how the DTH was able to get the information, we learn, “Last month, multiple current members of the SCV spoke to The Daily Tar Heel, alleging financial improprieties among the group’s leadership, referencing intermingling with gangs and hate groups, and describing threats and slurs that have been issued toward members who raise questions, including about the settlement and its financial winnings. Those members and others have since shared further information with the DTH. They have been granted anonymity based on personal safety concerns.”

The information is concerning, to say the least. “The SCV has held a federal and state tax-exempt status in North Carolina for over a decade, according to filings with the U.S. Internal Revenue Service. The group’s 501(c)(3) nonprofit status legally defines it as having been formed for charitable, religious or educational purposes. The mechanized cavalry, a nationwide subgroup of motorcycle-riding SCV members, filed for its own 501(c)(3) status in March 2019 under the name ‘SCVMC 2nd Bn Co B 1st Plt,’ according to the N.C. Department of the Secretary of State’s website. No further documentation on the group is available in the department’s database, but the cavalry’s nonprofit status is listed online as being active. The cavalry requires new recruits to have active SCV membership, and charges its own $100 fee upfront. An SCV member provided the DTH a list of all active cavalry members in North Carolina as of early 2019. It included over 400 unique names, equivalent to around $45,000 in cavalry membership fees. The member noted that many past and current cavalry members in the state were not on the 2019 list because they weren’t active during the timeframe that the list applies to. He recalled a temporary spike in 2015 after a pro-Confederate white supremacist murdered nine Black church attendants in South Carolina. The cavalry fees are paid in either cash or check, multiple members said. Members are told not to make such checks out to the organization itself, but instead to Bill Starnes, the cavalry’s former captain and SCV’s legislative officer.”

There’s essentially no accountability at all for the funds. “In an email last April, Starnes responded to concerns over his use of cavalry funds, saying the cavalry has never held a bank account. ‘We tend to have the cigar box in the gun safe approach,’ Starnes wrote. ‘So the checks are made out to the Captain, ie, Bill Starnes, so they can be cashed.’ The membership collections, and other funds raised by the cavalry, have not been tracked for years, multiple members said. That could raise problems for the SCV, the cavalry or Starnes himself, according to Felicia Branch, attorney at Branch Tax Law Firm. ‘If they are writing checks to him as an individual, I don’t see how that’s not income to him,’ Branch said. ‘A 501(c)(3) can charge membership dues, that’s tax-exempt. But he’s not, unless he began this other nonprofit called ‘Bill Starnes.’’ Starnes told members in his ‘cigar box’ email that when the SCV needs it, he uses cavalry funds for ‘a cash influx into the PAC,’ referring to a political action committee launched by the SCV in 2016 — one which has pumped thousands into campaigns statewide and, according to experts, exists in violation of the SCV’s tax-exempt status.”

The article next details the illegal campaign financing operation the NC SCV is running. “The NC Heritage PAC was certified by the N.C. State Board of Elections in 2016. In the PAC’s statement of organization, it listed ‘North Carolina Division Sons of Confederate Veterans’ as its connected organization. Both of its designated treasurers were active SCV members. John Wallace, former assistant attorney general in the N.C. Department of Justice’s antitrust division, told the DTH that under no circumstances is a 501(c)(3) organization legally permitted to create and operate an active PAC. ‘The SCV misrepresented their eligibility to serve as a sponsoring organization for the purportedly affiliated committee,’ Wallace said. ‘Misrepresenting its qualification to the State Board staff results in violations both of state law and the C3 status of SCV. Further, SCV has accepted contribution as deductible when in fact such contributions should not be deductible by their donors, given the political activity of SCV.’ The Heritage PAC reported $4,597.48 for the 2016 fiscal first quarter, according to the elections board. The SCV was listed as providing $1,943.48 of that money across six contributions, with various descriptions such as ‘TO JAKE SULLIVAN FOR WEB DOMAIN’ and ‘TO FRANK POWELL FOR DONATION PORTAL.’ Powell is the SCV’s national magazine editor. Sullivan was the SCV’s chief of staff last February, when he contacted Bob Rucho — a UNC System Board of Governors member since 2017 and former Republican state senator — to meet about Silent Sam, according to documents released publicly by the UNC System. The PAC replicated all but one of those first quarter donations as expenditures in its report, omitting a $200 SCV contribution to the PAC — the only one lacking a description. ‘Contributions by a C3 could subject the C3 to loss of its tax-exemption,’ Wallace said in an email to the DTH. ‘Acceptance by a PAC of a corporate contributions, including contributions from C3 entities, constitutes the acceptance of corporate contributions, another misdemeanor.’ In a Board of Elections memo dated April 28, 2017, auditor Jane Steffens noted the PAC received multiple in-kind contributions from the SCV, stating that all nonprofits must meet specific criteria, according to state law, for a PAC to legally take their contributions. However, while reviewing the SCV’s compliance she based her final decision on the word of Kevin Stone, commander of the SCV’s North Carolina division. Stone had sent her a letter saying the organization met all necessary criteria, and Steffens declared its contributions permissible. Steffens noted that she’d had contact with one of the PAC’s treasurers, Mitchell Flinchum, through the audit process. Wallace said assuming no bad intentions, ‘this whole bad situation’ may have stemmed from SCV leadership not understanding the restraints of its specific 501(c)(3) status. He called Steffens a capable auditor, but noted that she isn’t a tax lawyer. ‘What was missing from that whole discussion, and what is absolutely inherent in the proper resolution of the issue, is that if you are a (501(c)(3)), you are absolutely prohibited from intervening in political campaigns,’ Wallace told the DTH. ‘And so, nobody ever — because it’s such an absolute prohibition and jeopardizes the tax-exempt status of the organization — it is simply something that nobody needed to have said.’ The Heritage PAC has reported activity for every fiscal period since it was founded in 2016, according to the Board of Elections website. During the third quarter of 2018, an active period for the most recent state election, the SCV’s PAC donated $1,000 to each of six Republican candidates — David Lewis, Johnny Alexander, Larry Pittman, Michael Speciale, Mike Clampitt and Mitchell Setzer — and $500 to Republican candidates Paul Martin and Marcus Cooke.”

It gets worse. Some of the SCV leadership look to be guilty of a felony. “Multiple members described SCV leadership, Starnes in particular, using the SCV’s two statewide annual events — its winter and summer ‘Divisional Executive Council’ meetings — to facilitate PAC contributions over the last few years. As the members describe it, Starnes divided up mass sums of money into increments among members attending DEC meetings, telling them the SCV can’t donate the money as an organization. Those members are then told to provide the specific individual information required by the state for all political contributions exceeding $50. Some members suspect Starnes has doled out cavalry funds in these situations. One email provided to the DTH shows an SCV member in 2017 telling Flinchum, the PAC’s treasurer, ‘I put 300 in the PAC. Bill said I needed to fill out a paper? Thank you.’ Flinchum told them, ‘if you like,’ to just email him the necessary set of information — name, address, phone number, email, occupation and employer. Multiple legal experts told the DTH that a tactic of this nature is blatantly illegal, regardless of the group’s nonprofit status, known as ‘contributing in the name of another’ under state law. Wallace said PAC solicitation should never occur at a 501(c)(3) organization meeting. He added that Flinchum’s participation and acknowledgement of the scheme is ‘in the nature of perjury,’ given his role as PAC treasurer officially reporting contributions to the state. ‘Contributions in the name of another constitute class II misdemeanors,’ Wallace said in an email. ‘However, a statement made under oath, such as that made by a treasurer ‘knowing the information to be untrue,’ is guilty of a class I felony.’ ”

Hopefully the state will take legal action against these corrupt individuals. Thankfully, there are honest members of the SCV who are concerned about what the corrupt leadership is doing.