The 1619 Project Finally Gets a Substantive Defense

The defenders of the project have been very disappointing for the most part. Along comes Professor Charles Postel of San Francisco State University with an enlightening defense of one aspect of the project the five scholars criticized as follows: “Some of the other material in the project is distorted, including the claim that ‘for the most part,’ black Americans have fought their freedom struggles ‘alone.’ ” At her blog, Professor Bynum wrote, “After reframing the meaning of the American Revolution, Hannah-Jones moves on to the Civil War and Reconstruction, barely touching on American abolitionism and ignoring the Free Soil Movement, though both were seeds of the antislavery Republican Party. In discussing the nation’s wrenching effort to reconstruct itself after the Civil War, she asserts that ‘blacks worked for the most part . . . alone’ to free themselves and push for full rights of citizenship through passage of the Reconstruction Amendments. Rightly emphasizing the vigilante white violence that immediately followed the victories of a Republican-dominated Congress, she ignores important exceptions, including the Southern white “Scalawags,” many of whom were nonslaveholders who fought against the Confederacy in the war and participated with blacks and Northern Republicans in passing the Reconstruction Amendments. To be sure, Southern whites were among the most conservative members of the Republican Party. Nonetheless, important legislation was passed with their participation, enabling the United States by 1868 to begin building a more racially just, democratic society before white supremacist Democrats derailed Reconstruction. Furthermore, not only does Hannah-Jones ignore the Scalawags, but also Matthew Desmond, in his essay on capitalism and slavery, ignores nonslaveholding propertied farmers, the largest class of whites in the antebellum South, and from which many Southern Republicans emerged. Likewise, the 1619 Project ignores late 19th and 20th century interracial efforts to combat the power of corporations by an emergent industrial working class. Instead of studying the methods by which industry destroyed such efforts by fomenting racism, the project continues to argue that blacks struggled ‘almost alone’ in a world where an undifferentiated class of whites controlled the levers of power. Thus, some of our nation’s greatest historical moments of interracial class solidarity, the labor struggles shared by working class people across the color line, are erased. For example, the Populist Movement is barely mentioned, the early 20th century Socialist Movement, not at all. And, although Jesse Jackson’s rousing Rainbow Coalition speech at the Democratic Convention of 1984 is remembered favorably by one project author, the small farmers, poor people, and working mothers that Jackson included alongside African Americans, Arab Americans, Hispanic Americans, and gay and lesbian people are ignored. Multiracial communities are also passed over by the 1619 Project. Yet, race-mixing among Africans, Europeans, and American Indians early on presented British colonists with a dilemma—how to maintain the image of race-based slavery while increasing their labor force by enslaving people of partially white ancestry. The essentialist one drop rule, based on a theory of hypodescent, eventually provided the solution. Simply put, African blood was decreed so powerful (or polluting) that a mere fraction of African ancestry was enough to render a person ‘black,’ no matter how white that person’s appearance. Hannah-Jones herself recognizes the fallacy of “race” when she writes that “enslavement and subjugation became the natural station of people who had any discernible drop of ‘black’ blood (italics mine). The 1619 Project makes no attempt, however, to explore connections between race mixing and the class history of the United States. But make no mistake. The Southern slaveholding class knew that the one drop rule was a game of semantics. Slavery was first and foremost a closed labor system. Racism provided the rationale. Between 1855 and 1860, prominent proslavery author George Fitzhugh had no difficulty urging the United States to merge its systems of class and race by enslaving lower-class whites as well as people of color.” 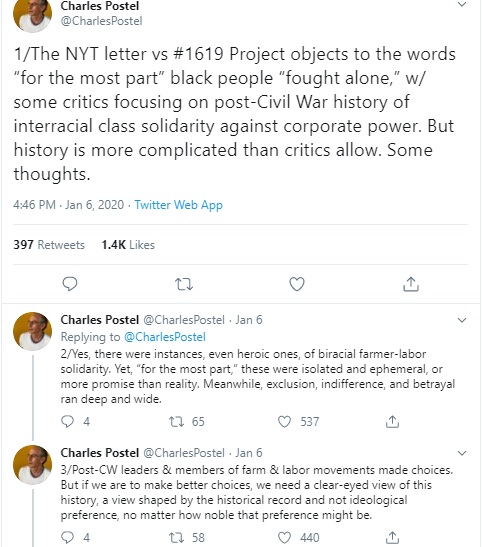 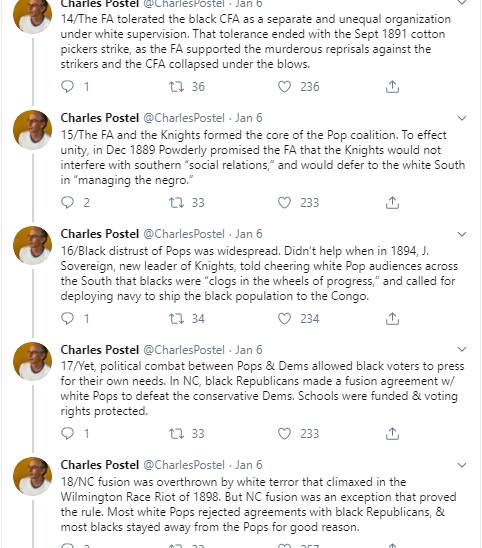 As you can see below, Professor Bynum can agree with Professor Postel, but instead of fostering the collegial agreement and exploring it to see if there is still a criticism of the project, other defenders, including Ms. Hannah-Jones, can’t resist attacking Professor Bynum.

You can see the interview referred to above here.

I enjoyed Professor Postel’s remarks, and I learned quite a bit from them. It seems to me Professor Bynum’s remarks simply meant she believed the statement in Ms. Hannah-Jones’s essay was too broad-brushed. I don’t see that Professor Postel rebuts that position but rather illuminates much of the struggle African Americans had as well as the struggle mixed-race coalitions faced and in many cases ultimately failed to sustain. It seems to me, and I could be wrong about this, Professor Bynum isn’t trying to minimize the struggle of African Americans but wants to ensure there’s recognition of the contributions of some white folks. I don’t think she would disagree with the statement that “for the most part” African Americans were forced to struggle almost alone. It seems to me that’s a small adjustment to the essay that recognizes the few cases of mixed race cooperation.

In any event, I’m happy to see a defender use some substantive remarks from which we can learn.