The Latest on “Silent Sam” 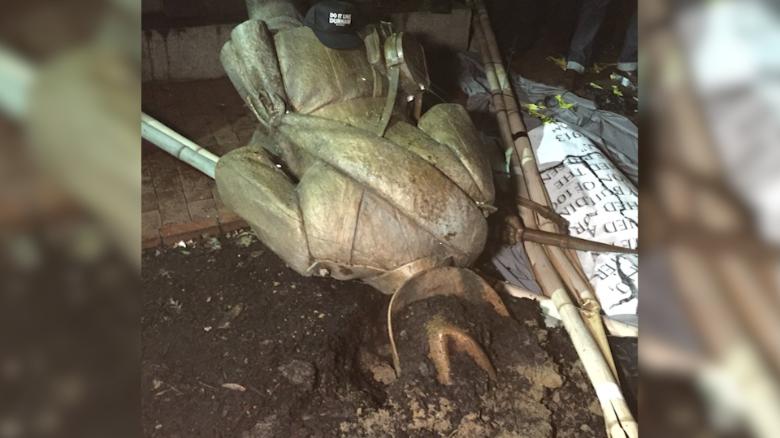 The monument to white supremacy torn down by students at the University of North Carolina is at the center of a settlement between the University and the Sons of Confederate Veterans. This article details the agreement:

The article gives us a short history of the monument and protests against it, and gives us a statement from one of the UNC Board of Governors: “The safety and security concerns expressed by students, faculty and staff are genuine, and we believe this consent judgment not only addresses those concerns but does what is best for the university, and the university community in full compliance with North Carolina law.”

In this article we learn, “The N.C. Sons of Confederate Veterans will own all rights, title and interests in the monument. The group’s commander, R. Kevin Stone, said in an emailed statement that they have ‘gained custody’ of the memorial and believe the terms are a fair result of their negotiations. Stone did not say whether the group has plans for where the statue will go.” We also read, “Lindsay Ayling, a UNC graduate student activist who’s helped organize Silent Sam protests, said, ‘This is the latest example of how UNC contributes to white supremacy.’ Ayling sees the fact that the monument won’t be standing in a county with a UNC System campus as a sign of UNC administrators fear of student protesters. ‘Our protests were effective, and we proved how powerful we were as a movement,’ Ayling said. ‘Their solution reveals their cowardice.’ She said the fact that the university system is paying $2.5 million for a ‘monument to white supremacy’ to be put back up in North Carolina is reprehensible. ‘Wherever it goes up it will put people in danger,’ Ayling said. ‘I don’t think there’s any place for Silent Sam.’ The fate of Silent Sam had been in flux for more than a year as UNC leaders and members of the Board of Governors have been discussing what to do with the controversial monument dedicated to UNC alumni who fought for the Confederacy in the Civil War.”

I think giving it to the SCV was probably the right move, but I think the $2.5 million is unfounded. If I were a student having some of my tuition money going to that, I’d probably transfer to another school. If I were a donor, I’d ask for my money to be refunded. If the SCV wants to take care of it, they should take care of it with their own money, not the university’s money.