Yet Another Group of Racist Confederate Flag Lovers in History 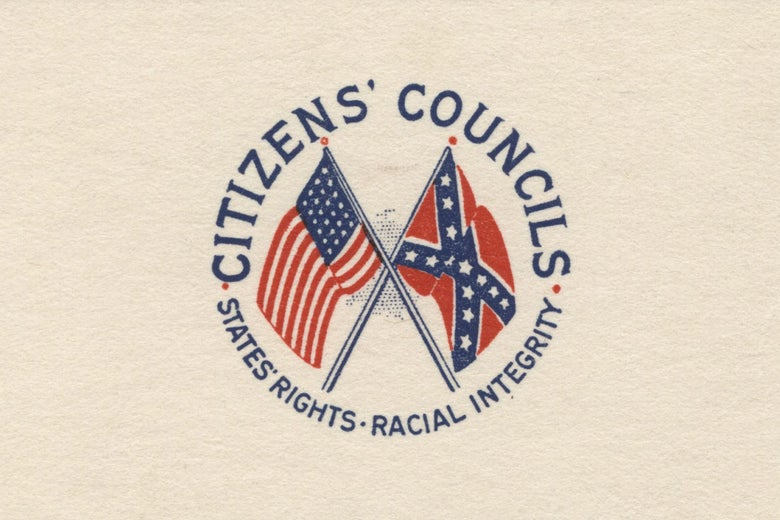 I came across this article from historian Rebecca Onion on the Citizens’ Councils in Southern States formed as a reaction to the Brown vs. Board of Education Supreme Court decision.

She tells us, “In 2002, Mississippi State University’s Mitchell Memorial Library Special Collections bought 418 open-reel magnetic audio tapes. They contained episodes of the Citizens’ Council Radio Forum, a broadcast program dating from 1957 through 1966. The name might sound staid, even boring, but that bland exterior was intentionally crafted. The first pamphlet this organization published, in 1954, began like this: ‘Either we will all stay white together, or we will be integrated county by county and state by state.’ Anyone wanting to see how midcentury racists courted—and won—mainstream audiences using mass media could do worse than to start here.”

The group was supposedly made up of the “respectable” white racists of the time. They were the ones in suits, not hoods, as the article tells us. “Mississippi State has recently made digital versions of about 300 of these audiotapes available online as well as transcripts of the tapes made by [historian Stephanie] Rolph in the course of writing her 2018 book, Resisting Equality: The Citizens’ Council, 1954-1989. The tapes were so fragile, Rolph told me, that six or seven of them snapped during the transcription process; seems like this act of preservation came right in time.”

Ms. Onion tells us, “Rolph’s transcripts make for fascinating and disturbing browsing, showing the tactics of an organization that perceived the country’s first small, then big, movements toward civil rights as a total state of emergency. The council’s major project was to slow down desegregation by solidifying white opposition. Members feared, Rolph explained to me, that white Americans were ‘accepting that desegregation is the order of the day. It’s the law. You should just accept it and move on with it.’ Using print publications, television, and radio, the council fought against ‘normalizing progress.’ They saw themselves as ‘truly American in their identity … representative of most white Americans, if those white Americans were being honest with themselves.’ For a while, the Forum programs were introduced by this tagline: ‘The American voice with a Southern accent.’ ”

We learn Byron DeLaBeckwith, the racist who murdered Medgar Evers, was a member of a citizens’ council. We’re also told, “White moderate Mississippi journalist Hodding Carter wrote in the New York Times in 1961 that the council was omnipresent in everyday life: ‘In countless restaurants across the state, Citizens’ Council literature can be picked up with the toothpicks at the cashier’s counter.’ (The University of Mississippi has digitized copies of some of these Citizen’s Council print publications; you can browse them here.)”

After discussing some of the racism in the broadcasts, Ms. Onion says, “After the passage of the Civil Rights Act of 1964, as integration became evermore the law of the land, the council didn’t seem to miss a beat in trying to recruit white Americans to its cause. In one episode, Simmons appeared as Morphew’s guest to describe his trip to Los Angeles immediately after the 1965 riots and couldn’t conceal a little bit of an ‘I-told-you-so’ tone, aimed at a Western city he thought was finally waking up to the realities of race. ‘It’s rather pitiful to see the reaction of [white] people who have been led by liberal commentators to have a guilt feeling for all this,’ Simmons told Morphew. ‘I heard one man say, ‘Well, I’ve never felt prejudice in my heart, but I do now.’ Of course, it’s not prejudice, it’s the instinct for self-preservation, but they are coming to a fuller understanding of what the rest of the country is facing.’ ”

She concludes the article by saying, “The archive is a wake-up call for those who perceive the midcentury civil rights era as a great leap forward in the nation’s moral progress, or who are surprised at the recent ‘rise’ of ‘respectable’ white supremacist thought. ‘The Citizens’ Council movement sought to ‘white out’ the civil rights movement through a reinvigoration of ideology and white activism,’ Rolph wrote in her book. If you look at the work of the council, she added, ‘it becomes clear that white supremacy was reborn in the civil rights era, not irreparably weakened.’ ”

As their logo shows, they identified closely with the confederate flag. They include the American Flag because they wanted, as the article tells us, to appeal to white Americans across the country, not just in the South where they were primarily located. But as we can see, this is yet another case where the confederate flag is the go-to symbol for racism.