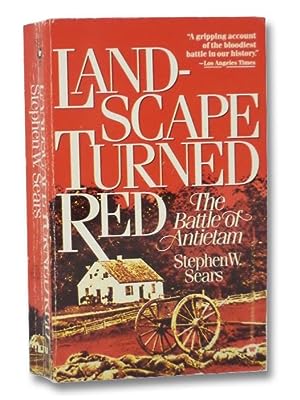 This book by Stephen Sears has been considered by many to be the best book on the Battle of Antietam. It’s certainly well written, and Mr. Sears did a lot of research for the book. Having read it several years ago, I had a very positive view of it. However, in recently rereading it after learning more about McClellan and about the battle itself, I see it as marred by an almost pathological bias against George B. McClellan. Still, the book has some really good information in it.

Sears talks about how Abraham Lincoln made the decision to write the Emancipation Proclamation. “Since the time of Fort Sumter abolitionists had argued that slavery was a legitimate target of the war simply because it was n issue of surpassing moral importance, a crime against all humanity. They labored tirelessly to carry this crusade onto the field of battle. The struggle now required far more than just men and money, abolitionist Senator Sumner insisted; ‘our battalions must be reinforced by ideas.’ By the summer of 1862 the abolitionists were still a small minority, but a great many other Northerners, war Democrats as well as Republicans, had come to agree that slavery was as much at issue as the restoration of the Union. Their reasoning, for the most part, was more pragmatic than moral. The terrible losses of a Shiloh or a Seven Days were argument enough. Slavery was beginning to be seen as an essential support of those Rebels who were killing Union boys by the thousands. Slaves dug entrenchments and performed other military chores; they raised the food and forage that went to the Confederate armies, and the cotton that was slipped through the blockade to be traded for foreign arms. This growing awareness of the military importance of Southern slavery was the fresh strength Lincoln intended to tap to keep the war going. The president moved carefully in this tide, seeking to control and guide it to his purposes. If he fell behind, he risked losing control of events to the increasingly vociferous radicals in Congress; if he moved too far ahead, he risked alienating the bipartisan support vital to his leadership. He had to consider as well the slaveholding border states and the sentiments in the army that General McClellan had cautioned him about. Early in July he told Senator Sumner that he would invoke emancipation immediately ‘if I were not afraid that half the officers would fling down their arms and three more States would rise.’ At first Lincoln proceeded cautiously, avoiding any constitutional dispute by proposing to the states a plan for gradual, compensated emancipation. With mathematical care he worked it out that freeing all the slaves in all the border states would cost the government the equivalent of only eighty-seven days of making war at current expenditures. On July 12, in an address to border-state representatives, he appealed to their common sense: ‘ … the institution in your states will be extinguished by mere friction and abrasion–by the mere incidents of the war. It will be gone, and  you will have nothing valuable in lieu of it.’ His listeners, however, could not face such a drastic step, and no state came forward to accept the offer.” [pp. 46-47]

In discussing Robert E. Lee’s view of his reasons for moving north and his objectives, Sears writes, “While Lee continued to outline his military objectives in cautious generalities, he laid before President Davis a political analysis that was considerably more bold. Now was the moment, he wrote, for the Confederacy to propose an end to hostilities in exchange for its independence. ‘Such a proposition, coming from us at this time, could in no way be regarded as suing for peace; but, being made when it is in our power to inflict injury upon our adversary, would show conclusively to the world that our sole object is the establishment of our independence and the attainment of an honorable peace.’ Even if the offer was rejected, Lee saw profit in making it. A proposal for peace, he concluded, would present Northern voters in the impending fall elections with the choice to ‘support those who favor a prolongation of the war, or those who wish to bring it to a termination. … ‘ ” [p. 72] In outlining his military objectives, “Lee was considerably more explicit in a conversation with General John G. Walker when that officer reported to him with two brigades of reinforcements from Richmond. As Walker recalled the scene, Lee stood at a large map and pointed to Harrisburg, Pennsylvania, some seventy miles north of the Maryland line, and told him, ‘That is the objective point of the campaign,’ He reminded Walker of the major bridge that carried the Pennsylvania Railroad across the Susquehanna River near Harrisburg. ‘Well, I wish effectually to destroy that bridge, which will disable the Pennsylvania railroad for a long time. With the Baltimore and Ohio in our possession’–that much-beleaguered line would be squarely on the Confederate line of march in Maryland–‘and the Pennsylvania railroad broken up, there will remain to the enemy but one route of communication with the West, and that very circuitous, by way of the Lakes. After that I can turn my attention to Philadelphia, Baltimore, or Washington, as may seem best for our interests.’ ” [pp. 73-74]

The big piece of evidence Sears uses in his case against McClellan is the message he sent to Washington after being handed Special Orders 191, the famous “Lost Orders.” “Datelined ‘Frederick, September 13, 1862–12m.’ (12 meridian, or noon), it contained a sense of elation quite unlike any other dispatch he had sent Lincoln: ‘I have the whole rebel force in front of me, but am confident, and no time shall be lost. I have a difficult task to perform, but with God’s blessing will accomplish it. I think Lee has made a gross mistake, and that he will be severely punished for it. … I have all the plans of the rebels, and will catch them in their own trap if my men are equal to the emergency. I now feel that I can count on them as of old. … My respects to Mrs. Lincoln. Received most enthusiastically by the ladies. Will send you trophies.’ ” [pp. 124-125] The key to Sears’ interpretation here is the identification of 12m as 12:00 noon. If it’s 12:00 midnight, then it was sent 12 hours after Sears believes it was sent and his case that McClellan was too slow to react falls apart. He writes, “So the afternoon hours of September 13 slipped away, and then the evening hours. Except for the advance to Middletown, begun before Order 191 reached McClellan’s hands, no Federal troops stirred from their camps that day. It could not be said they needed the rest; the farthest any of them had marched the previous day was ten miles. No doubt had the situation been reversed and a Lost Order presented to Robert E. Lee, that general would have had Jackson’s foot cavalry on the march within the hour and every other man in his army who could carry a rifle moving after them within two. But George McClellan marched to a very different drum. Within his illusionary world he forever faced a superior foe. … As a result, he geared all his plans to reducing the risk to his own army to a minimum; he hoped for a victory, but if nothing else he should at least be able to force this divided enemy host from Northern soil. Surely the country would see that as accomplishment enough.” [p. 133]

He goes through the battle of South Mountain as well as the battle of Antietam. He presents a great deal of information about both battles, providing perspectives from the participants and doing his best to show what happened in chronological order.

I think the best book on Antietam hasn’t been published yet, but we can feel happy because D. Scott Hartwig is actively working on it. In the meantime, this book can serve as a useful guide.