With Malice Toward Some 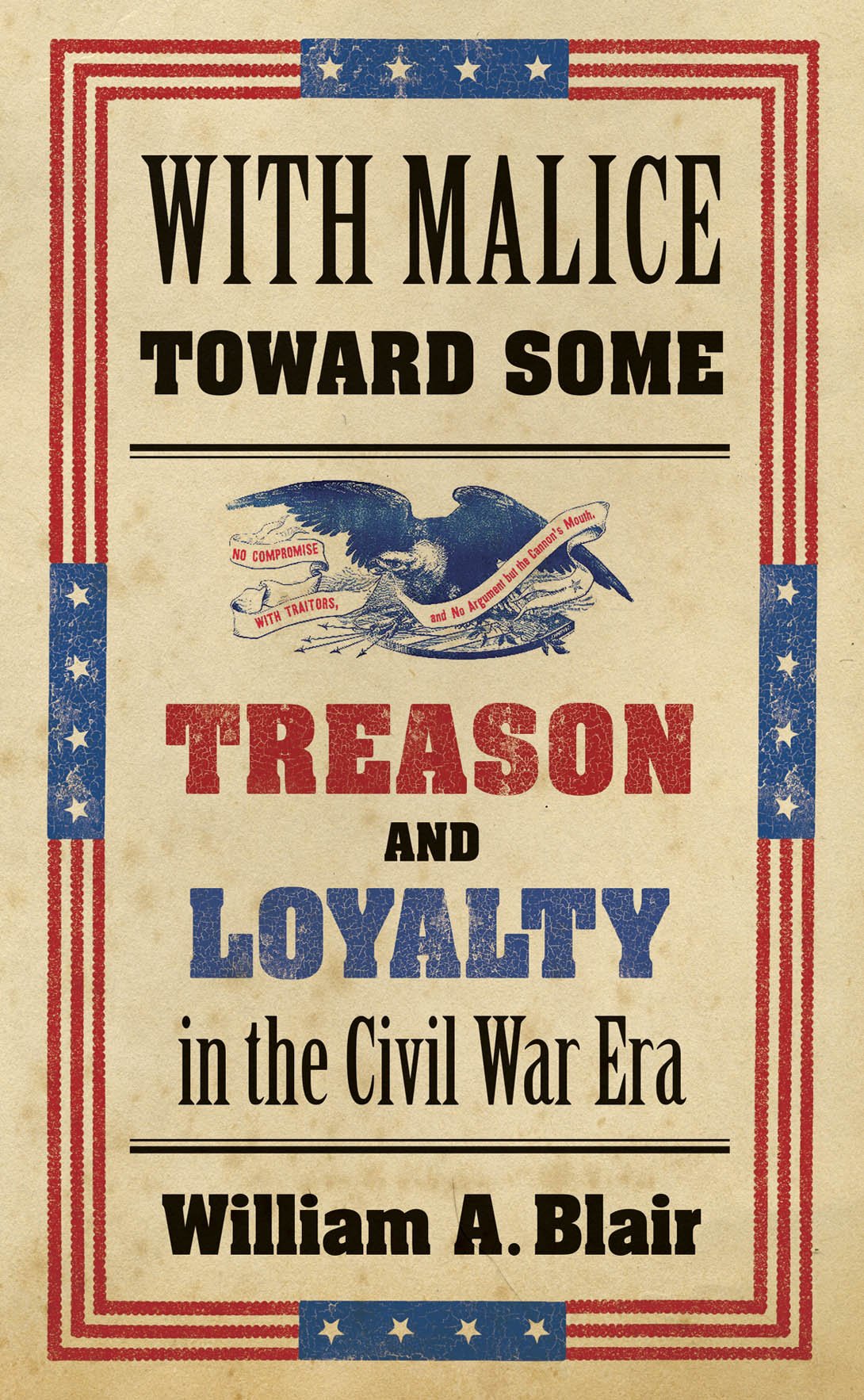 This book by Professor William Blair of Penn State University examines how Federal officials punished treason in the Civil War and just afterward. In the Introduction, we learn, “Treason pervaded public discourse. It represents a challenge for a researcher to find a northern newspaper or periodical during any day of the war in which the words ‘traitor’ and ‘treason’ do not appear as a characterization of the rebels, of political opponents, or of the people suspected of holding divided loyalties in the United States. Popular conceptions of treason–or opinions formed outside of civil courts but in tracts, legislative halls, and executive chambers, and through actions in the streets–justified confiscation of rebel property, including slaves, ships, and other contraband; allowed soldiers to arrest women who taunted them; enabled a Union general in New Orleans to hang a man for tearing down a U.S. flag; caused thousands of arrests by the military in the loyal states for something called ‘treasonable behavior’; encouraged as patriotic acts informing on neighbors with little or no evidence; enabled soldiers to prevent people from voting; allowed authorities to suppress newspapers and arrest editors who criticized the Lincoln administration; allowed them also to arrest political figures and judges; and motivated soldiers in their efforts to remove a clergyman in Virginia in the midst of an Episcopalian worship service because he refused to administer the prayer for the president. Numerous examples indicate an excessive use of force against so-called treasonous behavior, yet supporters of the administration shrugged such things off as necessary actions to save the nation and as the just deserts for traitorous behavior; imperfectly defined.” [pp. 1-2]

Professor Blair tells us, “In many respects, loyalty became a struggle over the security of households. Union military officials and provost marshals in occupied areas began to use access to livelihood to coerce faithfulness, by trading provisions and the ability to practice their professions for oaths of loyalty. The military realized that this ritual, far from guaranteeing fidelity to the nation, often represented nothing more than lip loyalty rather than sentiments of the heart. Goods were seized, as well as slaves, on the basis of their owners committing treason that was never tried in a court. The Second Confiscation Act, designed to punish traitors, did give some legal standing to the military in taking property. General William T. Sherman, in fact, awarded to objects the power of a capital crime against the state when he said, ‘All cotton is tainted with treason, and no title in it will be respected.’ ” [p. 6]

As part of the fight against treason, soldiers even took measures to keep traitors from hurting the nation through the ballot box. “Soldiers tipped the results in at least one congressional race in Maryland. And in Delaware, the policy of stationing troops at polling precincts, where a voter’s intention could easily be discerned because there was no secret ballot, caused Democrats to boycott an election, sending an antislavery Republican to Congress. The 1864 presidential election took place in the shadow of these actions, which Democrats used to illustrate their lament about the administration’s abrogation of the Constitution as the best strategy to put forth in the campaign. In the Congress, border state representatives pushed for legislation to prohibit the troops from being within a mile from precincts on election days. They eventually won, but not until Republicans delayed the bill until 1865, or after it had any practical impact on the war. Unaccountably, this activity by the military at polling precincts–appearing in certain state studies and especially earlier works by revisionist historians–has fallen out of the general literature of the war and does not appear in recent biographies of Lincoln.” [pp. 6-7]

Although it was self-evident confederates had committed treason against the United States, there were no executions for the crime. Professor Blair investigates this. “Despite the expressed desires to hang some of the leading rebels, such as Jefferson Davis, and the indictments of nearly forty ex-Confederates, including Lee, in civil court for treason, none of these men hanged for the crime. The military played a role in the movement toward clemency in the form of the paroles given to Confederate soldiers in exchange for their promise of loyalty. Although this seemed to close the book on prosecuting the rebels in arms, it did not. Popular legal opinions, including the writings of Columbia law professor Francis Lieber, suggested that the lenient terms of surrender did not preclude rebels from being prosecuted as traitors. The paroles, in this view, had died with the war in a way similar to the prisoner exchange system. Plenty of discourse suggested that paroled soldiers could, and should, be tried. But the political will did not exist to sustain the effort. Or perhaps it is more accurate to say that other political goals took precendent [sic]. Reunion was the primary goal of the war, and it did not pay to create martyrs who might inflame the people expected to embrace renewed dominion by the federal government. It especially did not pay to lose court cases that might prove secession possible, which legal advisers considered a real possibility. As the battles intensified between President Andrew Johnson and Congress over the goals of Reconstruction, concern over the fate of rebels indicted for treason faded.” [pp. 7-8]

One reason for the leniency was the support of two significant groups for that leniency. “But two groups of people lent their voices to the movement of reconciliation with traitors. One was a wing of abolitionists typified by Horace Greeley and Gerrit Smith, both of whom argued for clemency for the rebels. Their support for reconciliation rested, it seems, on their broad interests in societal reform that included repugnance for capital punishment and a belief that hangings reformed no one. African Americans, meanwhile, also found themselves rejecting vengeance on slavemongers because it did not serve their political efforts for equality. They banked their hopes on reminding white politicians that black people had been loyal to the Union and that restoring the slaveocracy to power without enabling black men to vote gave power back to traitors who could undermine the victory. Reconciliation-minded abolitionists and African Americans consequently found themselves in agreement concerning mercy for traitors, although for different reasons.” [p. 8]

This is not to say the traitors escaped punishment altogether. While they didn’t face execution, there was still considerable sentiment for punishment of some type. The fact that these punishments fell overwhelmingly on Democrats was icing on the cake for Republicans interested in maintaining power in elective office. “One of the underappreciated issues in Reconstruction has been the extent to which Republicans debated and experiment with various means to restrict the suffrage and the national influence of traitors, with mechanisms for this finding their way into the Fourteenth Amendment. Black people were considered as the loyal constituency in the South and a possible balance against the restored power of rebels in politics. Yet early in Reconstruction it was clear that voting rights for African Americans in the Confederacy raised mixed feelings among many white people in the North, where most black people did not have the right to vote. Because of federalism, or the recognized right of states to determine who could vote, advancing the cause of black rights required a dual fight at national and state levels. Northern blacks in the Equal Rights Leagues developed multiple approaches realizing that they had to push for changes to constitutions in states like Pennsylvania, which reserved suffrage for white freemen. One avenue to explore more precisely for Reconstruction is the extensive restructuring of state constitutions in the North, almost all of which had to conform to the new standards of freedom established in the national Reconstruction Amendments. The former Confederacy was not the only place rewriting its state constitutions; states in the North also had to revise their fundamental laws. … Especially in the border states, various means were employed to prevent former Confederates from voting. Loyalty oaths in Missouri and West Virginia were particularly effective in keeping Republicans in power by preventing those who had served the Confederacy from exercising the franchise. Other techniques that became popular included new voter registration laws, ostensibly designed to protect against voter fraud but also giving judges of elections sitting at precincts broad powers to deny a person suspected of disloyalty in the war access to the ballot box. But there were additional attempts to keep disloyal people from exercising the franchise. Republicans in perhaps seven northern states took advantage of a federal law passed near the end of the war that stripped deserters from the Union army of their rights as citizens. It was commonly believed that most deserters were Democrats, so these efforts were partisan.” [pp. 8-9]

Professor Blair goes into a history of the origin of the treason charge and how it was applied in the early years of the United States. In many instances, the word “treason” was applied to actions of abolitionists who were attempting to free enslaved people. This shows how proslavery the antebellum United States was in actuality.

It’s a popular notion that there were never any treason trials for confederates. That’s not true. “Indictments during the war easily numbered in the thousands. But while the indictments were many, the trials were few. They happened periodically, and when they did, it was notable that the federal courts remained levelheaded in the handling of these cases. One of the first dealt with Charles A. Greiner, arrested and charged with treason for aiding in the seizure of Fort Pulaski in Savannah, Georgia.” [p. 52] Some of these cases resulted in acquittals. “In late 1862, newspapers touted the case of Andrew J. Houston as the first treason trial of the war. He had participated in a raid by Confederate guerrillas on the town of Newburgh, Indiana, in July 1862. His case remained active for a little while, until he was finally found not guilty in 1863. In Kentucky, meanwhile, a man named Thomas C. Schachlett apparently served in the Confederate army, returned to his native county, and killed a postmaster. He was tried before U.S. Judge Ballard and found guilty of treason. Much more common was the tendency for the federal courts to leave the indicted prisoners in legal limbo, sometimes for the entire war. This happened with one of the most famous controversies concerning habeas corpus. In 1861 the Lincoln administration ignored Chief Justice Taney’s order to produce the body of John Merryman. Eventually he and numerous other Maryland rioters were turned over to civil authorities. … It took until April 1867 for the charges against him to be dropped.” [p. 53]

As previously mentioned, former confederates were punished for treason at the ballot box. They were also punished financially. Not only did the slaveowners among them lose their slaves without compensation, but also the entire confederate war debt was repudiated, and thus anyone who held confederate bonds lost all the money they invested in those bonds.

I can highly recommend this book for an understanding of treason during the Civil War, its prosecution, its punishment, and the leniency shown to the traitors during and after the war.

← The Generalship of Robert E. Lee, Part Eight
The Siren →