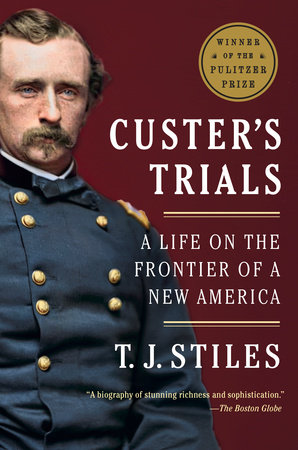 This is a wonderful book by T. J. Stiles. It was a pleasure to read, both because it was engagingly written and because the author doesn’t confine himself to simple biography but instead places the subject within the context of the times, giving us in essence a history of the part of the United States inhabited by the subject while the subject was there. He also approaches George Armstrong Custer from a slightly different angle. As he writes, “I want to explain why his celebrity, and notoriety, spanned both the Civil War and his years on the frontier, resting on neither exclusively but incorporating both. Something was going on in the country that included the Civil War, westward expansion, and much more. Something about the man resonated with Americans as they experienced it. He caught the public imagination because his life spoke to that something. … We must see him less in terms of place than of time. George Armstrong Custer lived on a chronological frontier even more than a geographical one. He and his contemporaries experienced the greatest wave of change ever to strike American society, a tsunami that ripped out and reordered everything. This is what his life spoke to, wherever he went.” [pp. xvi-xvii]

Custer was a racist, proslavery conservative Democrat [as was his wife, Libby, even though her father was a Republican], though he indulged his ambition by cultivating abolitionist politicians for their support when he believed it would advance his career. “Custer’s politics began at home. To his father, the Democratic Party was life itself. ‘Our father Custer was of the most intensely argumentative nature,’ a daughter-in-law would recall. ‘He was the strongest kind of politician … and grows excited and belligerent over his party affairs.’ He held dear the Jacksonian ideals of individualism and equality. But the individuals and equals he had in mind were all white men. This was a general truth in American politics, but a particular truth about him. The same daughter-in-law would one day write in a letter, ‘You are well aware how father Custer feels over the ‘[n-word]’ question,’ and, ‘You know well father Custer’s antipathy to the negro.’ The Custers belonged to border-state culture. The Marylander Emmanuel [Custer’s father] had joined a broad migration from the upper South across the Ohio River. But Bingham [the Congressman who appointed Custer to West Point] was a Republican and an open abolitionist as well, casting suspicion on Custer. The congressman was close to Joshua Giddings, despised in the South for his vehemently antislavery views, and lodged in the same boardinghouse with him in Washington. Southern cadets noticed such things, and demanded that plebes state their political views. ‘It required more than ordinary moral and physical courage to boldly avow oneself an abolitionist,’ Custer recalled.” [p. 19]

Another aspect of his life is “Custer’s Luck,” which manifested itself early. An example of this is the 1861 midyear examination. “At the examination, the Academic Board watched each instructor quiz his cadets, one by one. Custer knew he would fail one class unless he learned the questions in advance. The instructor lived in the post hotel, where, [Tully] McCrea [a fellow cadet] wrote, ‘bribing one of the servants’ was possible. With money or stealth, Custer broke into the instructor’s room. He found the examination notebook and started to copy the test. He heard footsteps. He ripped out the sheet of questions and slipped out before he was caught. ‘But in doing this he spoiled everything, for as soon as the instructor discovered that the leaf was missing he knew that some cadet had it,’ McCrea observed in a letter. The instructor ‘changed all the subjects and the risk and trouble was all for nothing.’ Custer failed the test, along with more than thirty other cadets. The board allowed a reexamination. Custer flunked again, as did all but a few. After three and a half years at West Point, with war seemingly inevitable, his army career was over. Then he was reinstated. Out of dozens who were dismissed, he was the only one to be saved. He had no idea why. Not for the first time, not for the last, an extraordinary, inexplicable turn of luck had saved him from himself. And so he remained at West Point in that cascade of days in early 1861, studying, drilling, practicing ‘cutting heads’–slashing with a saber at leather balls stuffed with straw while riding a horse.” [p. 24]

Those looking into Custer’s life also deal with Custer’s attaching himself to one patron after the other. The first of these was Brigadier General Philip Kearny. “Custer’s 2nd U.S. Cavalry Regiment was redesignated the 5th, though the personnel remained the same. Not that Custer got to know the personnel. Seeing an opportunity, he joined the staff of Brig. Gen. Philip Kearny, who commanded an infantry brigade of volunteers.” [p. 35] He would eventually follow Kearny with such luminaries as George B. McClellan, Alfred Pleasonton, and Philip Sheridan.

After Kearny’s staff, Custer was then assigned to the topographical engineers, where he scouted ahead of the army, sneaking through swamps and woods, sketching maps and finding out where the enemy troops were encamped. As part of that assignment, Custer went up in balloons on the Peninsula to sketch out the terrain and the enemy lines. Here he showed his creativity. “He noticed the view–the forested, wrinkle-edged Peninsula, extending northwest between the wide James and York rivers. He identified the markers of the Confederate line–Warwick Creek on the left, dammed in several places to turn it into a chain of impassable lakes, and Yorktown on the right, on the shore of the York. The wind repeatedly caught the balloon and knocked it about, but when it died down, ‘with the assistance of a good field glass,’ he recalled, he could ‘catch glimpses of canvas through the openings in the forest. … Here and there the dim outline of an earthwork could be seen more than half concealed by the trees … while men in considerable numbers were standing in and around the entrenchments, often collected in groups, intently observing the balloon.’ The young man sketched the enemy line and camps as best he could. A thought occurred to him: Why not go up at night? Campfires would be visible through the forest canopy. So he came down, delivered his map, and went up alone after dark. But in late April tidewater Virginia was already warm, and the rebels lit few fires. He thought of a new approach. Now a veteran balloonist, he went aloft just before dawn, when fires were lit to cook breakfast. This time he saw the encampments precisely, and made an estimate of Confederate strength.” [p. 45] Custer would prove that whatever his faults, he was still a technically proficient officer. He excelled in his performance, even if he did not excel in the arena of self-discipline. “Externally, Custer was the archetype of an eager young officer. Internally, he was many things. He was a loyal underling. His assignment to the topographical engineers seemed random, yet he carried out his duties promptly and well. His superiors’ reports offered no hint of the self-absorbed miscreant of West Point. And he was a serious professional. His letters home often included military analyses, some quite astute. At Williamsburg he studied Hancock’s performance–his self-possession and perfectly timed counterstroke. Custer later wrote an account of the battle that showed how much he appreciated the lesson. In one respect, though, he remained scarcely more than an adolescent. He lacked any real sense that something bad might happen to him.” [p. 47] Stiles tells us McClellan’s assessment: ” ‘In those days Custer was simply a reckless, gallant boy, undeterred by fatigue, unconscious of fear,’ McClellan later wrote; ‘but his head was always clear in danger, and he always brought me clear and intelligible reports of what he saw when under the heaviest fire.’ ” [p. 62]

I do have a couple of minor points of criticism. On page 99, in discussing the Battle of Gettysburg, he says if the rebels had seized Little Round Top they would have won the battle by unhinging the Union line. I disagree with that assessment. The Sixth Corps would have been able to react, cut off the rebels, and even retake the hill. Little Round Top would not be a good place for the confederates to use to attack the rest of the Union line. It makes a poor artillery platform when firing to the north. It’s a much better artillery platform when firing toward the west, where the confederates were. Still at the Battle of Gettysburg, on page 100, he claims J.E.B. Stuart’s mission was to get to the rear of the Union line during Pickett’s Charge “and pursue and destroy the retreating foe.” There’s no evidence for this. Indeed, according to Lee’s report, Stuart was to guard the left flank of the Army of Northern Virginia. He would be in position to pursue retreating troops, but his primary mission was to guard the flank. On page 104 he writes, “The cavalry battle mattered. Stuart was a superb combat leader; if he had been able to reach the rear of the Union line during the rebel infantry attack (known in popular memory as Pickett’s Charge), the story of Gettysburg would have taken a different course.” Again, Stuart’s mission was to guard the left flank. His actions make no sense if he was trying to get into the rear of the Union infantry. He moved forward to make contact with Union forces to see where they were. He didn’t press his attacks and retreated fairly soon in the engagement after having ascertained where the Federals were located. I have to stress these are very minor points within the larger narrative. I also would have liked to have seen him make more use of Ethan Rafuse’s work on McClellan and Brooks Simpson’s work on Grant than he did, which would mean less reliance on Stephen Sears and William McFeely, but again that is a minor point within the larger framework. None of these criticisms detract from the book’s usefulness. Its numerous strengths far outweigh the minor criticisms.

As most know, Custer’s story goes beyond the Civil War into Reconstruction and on to the frontier, and Custer’s weaknesses were on display far more in his frontier experience. Stiles goes into those weaknesses, but in this balanced account he also delves into Custer’s strengths as a professional cavalry officer. While doing so he shows sensitivity and knowledge of the Indian culture and history, especially the history of the warring tribes on the plains. One of Custer’s biggest errors was getting himself immersed in partisan Democratic politics as a political enemy of President Ulysses S. Grant, though he would still try to curry favor with various Republican politicians he thought would advance his career.

The book is packed full of information. Stiles makes judicious and balanced assessments and provides us the context in which Custer’s decisions and actions took place. I highly recommend this book for any student of history. It’s excellent.