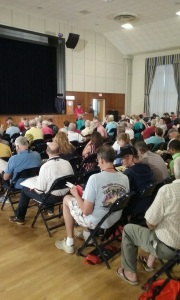 The first day of the conference is in the books. It was great to see friends and to meet new friends.

First up was Prof. David Silkenat of the University of Edinburgh speaking on “An Honorable Defeat: The Confederacy and Reconstruction.” He looked at the concept of honor as seen in the 19th Century. It was community-based in that it was based in how one was seen by one’s community. It was a masculine concept. Women had virtue, men had honor. It dealt with being in control of one’s emotions, oneself, and those around you. In the slaveholding South, the concept was modified to include mastery. This meant a man was master of slaves, of the women in his family, and of the male dependents in his family. Challenges to a man’s honor were met with violence, and the form of violence varied with class. Planters fought duels and poor whites would engage in brawls. The violent reactions were a result of the belief that to challenge a white man’s honor in the slaveholding South was to metaphorically reduce him to the status of a slave. The concept of honor extended to the battlefield as well. The greatest fear soldiers of the time had going into battle was not that they would be killed or wounded, but that they would act dishonorably. In Reconstruction, due to the concept of honor there was an unintended consequence to the lenient surrender terms given to the confederates. Since their honor was intact, they could continue espousing confederate principles. This also bled over into violent reactions to freed people attempting to exercise their rights as free people in the society. While this is not a complete explanation for the violence of Reconstruction, it does explain one facet of what brought on the violence.

Next was Professor Mark W. Summers of the University of Kentucky, speaking on “The Questions of Reconstruction,” He opened by telling us of a resolution introduced by Sen. Charles Sumner of Massachusetts to remove all markings of victory over the confederate forces in battle to be stripped from the regimental flags of United States Regular Army units. His reasoning was keeping alive the memory of a civil war was barbarous. That resolution failed. On the same day, he introduced another resolution for a civil rights bill giving equal rights to all citizens regardless of color. In a terrific speech marked by a great deal of energy and quite a bit of humor, Professor Summers framed the issue of Reconstruction for us, telling us Reconstruction was undone by terrorism. In stark terms, he likened the violence engaged in by white southerner terrorist groups such as the KKK and the White Knights of the Camellia after the Civil War to that engaged in by ISIS today. He said if you like ISIS you would love what white southern terrorist groups did during Reconstruction, He pulled no punches.

All the presentations were recorded, and I’ll provide the links as soon as I can get them.

Today was a great day and I’m looking forward to tomorrow.