There are a few developments on the confederate flag front.

The Sons of Confederate Veterans are planning a day for the symbol of racial oppression in Gettysburg. Gary Casteel, the sculptor responsible for the statue of James Longstreet on a carousel horse at the Gettysburg National Military Park, is a member of the group and is apparently their spokesperson for this event. “The Confederate flag is nothing more than a piece of cloth that represented a nation of its day, that’s it,” Casteel said. Apparently he never heard of this: 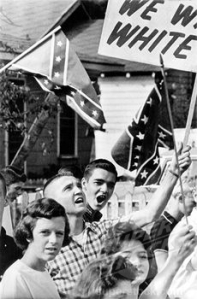 It’s quite a lot more.

The idea has been rightly called “A holiday from reason.”

“The Sons of the Confederate Veterans tells those who oppose the Confederate flag to ‘learn their history,’ but their own sense of history appears selective. The flag isn’t just a symbol of states’ rights, or modern-day opposition to the federal government. Those who originally fought under it fought, in part, to defend the institution of slavery. The flag, historically, has been a symbol used by the Ku Klux Klan and the pro-segregationist Dixiecrats political party. It is a persistent presence in the imagery of white supremacists including accused Charlotte church gunman Dylann Roof.”

In Virginia, the Virginia Flaggers placed another marker to their failure to prevent flags from being removed. This is in Prince George’s County on I-95 by Mile Marker 40. So is this another case of spreading love for the flag? Hardly. It’s placement is accurately termed, “In your face.” “It’s also smack dab in the middle of a small, largely African-American neighborhood. One 82-year-old resident thought the Ku Klux Klan had arrived when the flag went up with cannon fire – without warning to her – last Saturday. She called police. Finding out that it was put up by a southern heritage group didn’t ease her feelings. ‘We’ve never had anything in the area like that,’ she said. ‘I don’t want it in this neighborhood.’ ” As usual, the flaggers show they’re simply a hate group wannabe.

This past Friday I attended a lecture on Robert E. Lee after the war Professor Robertson gave in Fredericksburg. After the lecture someone in the audience asked him about displays of the confederate flag: