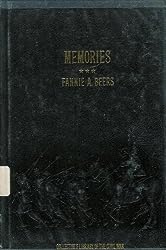 This is a book by Fannie A. Beers, who was a confederate nurse during the Civil War.  Born and raised in Connecticut, she married a southerner, Augustus Beers, in the 1850s and moved to New Orleans.  Her husband was a soldier in the 1st Louisiana Battalion and she volunteered at hospitals near where his unit was assigned.

Written almost a quarter century after the end of the Civil War, the book is a paean to the lost cause.  There’s no mention whatsoever of slaves; however, she does have a “servant,” a black woman who is her “maid,” named Tempe.  Additionally, on her way to Charlotte, North Carolina she stopped in Columbus, Georgia.  “When I got to Columbus, Georgia, was ordered to send on my stores with my negroes and women-servants, in charge of a faithful man, while I and my detailed men were to remain in the city during its investment, and as long as the struggle lasted, but at last to save myself, and join my stores in Macon, Georgia.  Remained during the fight, while the city fell, and all my detailed men were captured; rode out of the city by the light of the burning buildings, and my road was lighted for twelve or fifteen miles by the burning city; borrowed horses about twelve at night, caught the last retreating train, put my servants Noel and Sam on it; rode on with my true friend Dr. Yates.  Found the servants at Genoa Station, a distance of thirty-five miles, next morning at sunrise, thence to Macon.” [p. 186]  Fannie Beers was no doubt a very well-to-do, upperclass woman, and she and her husband appear to have owned quite a few slaves.

While many of the stories she tells purportedly were her own experiences, she also has a large number of stories she relates that supposedly had been told to her.  In true lost cause fashion, one of these stories involves a “faithful slave,” Winnie, whose mistress tells her, ” ‘But, Winnie, only Nelly and I are going away.  You are free now, and will find other friends, and–‘  ‘Dah!  dah!  honey,’ broke in the poor old creature, ‘don’ say no mo’!  I’s ‘bleeged to go ‘long.  Wat I want to be free for?  Who gwine keer ’bout me?  ‘Sides, I dun promus Mars Ned I gwine to see to you an’ dat chile yander, an’ I’s gwine ‘long shuah.’ ” [pp. 254-255]  This was another story purportedly told to her.

One doesn’t learn much about the Civil War from this book, but it is one highly partisan confederate woman’s viewpoint, albeit without admitting what the confederacy’s motive really was.  It’s instructive as a document of lost cause mythology and does give us a view, though somewhat self-serving, into confederate hospitals.

← Marching Home: Union Veterans and Their Unending Civil War
Their Last Full Measure: The Final Days of the Civil War →