Personal Recollections of a Cavalryman

This is James Harvey Kidd’s memoir of his Civil War experiences, later reissued as Riding With Custer. 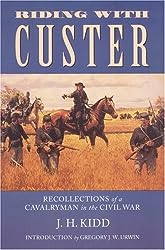 The book is an excellent read, well written and providing a close-up view of someone who knew George Armstrong Custer and was an unabashed admirer of the general.  He also gives us an inside view of the cavalry, such as when he tells us about how horses were distributed to the regiments: “The horses were sorted according to color, the intention being that each unit should have but one color, as near as practicable.  thus, as I remember it, troop ‘A’ had bays; ‘B’ browns; ‘C’ greys; ‘D’ blacks; and so on.  This arrangement did not last long.  A few months’ service sufficed to do away with it and horses thereafter were issued indiscriminately.” [p. 48]  He tells us, “Cavalry regiments were divided into three battalions, each consisting of four troops and commanded by a major.  Two troops were denominated a squadron.  Thus there were two troops in a squadron, two squadrons in a battalion, three battalions in a regiment.” [p. 57]  The Michigan Brigade, according to Kidd, were armed with the Spencer carbine from the beginning.  The Spencer carbine was a repeater with a magazine, according to Kidd, that held eight cartridges. [p. 78]

He talks about how the “frugal Dutch” in Pennsylvania often charged Union soldiers for food during the Gettysburg campaign: “But it seemed a little hard for the Michiganders to be there defending the homes of those opulent farmers, while they, so far from taking up the musket to aid in driving out the army that was invading their soil, were seemingly unwilling to contribute a cent, though I may have misjudged them.  It looked odd, too, to see so many able-bodied men at home, pursuing their ordinary avocations, with no thought of enlisting, while a hostile army was at their very doors.  It looked so to the soldiers who had been serving in Virginia, and who knew that in the South, every man able to bear arms was compelled to do so, and that within the lines of the confederacy, the cradle and the grave were robbed to fill the ranks.” [pp. 117-118]

Kidd has this assessment of Custer:  “Brave but not reckless; self-confident, yet modest; ambitious, but regulating his conduct at all times by a high sense of honor and duty; eager for laurels, but scorning to wear them unworthily; ready and willing to act, but regardful of human life; quick in emergencies, cool and self-possessed, his courage was of the highest moral type, his perceptions were intuitions. Showy like Murat, fiery like Farnsworth, yet calm and self-reliant like Sheridan, he was the most brilliant and successful cavalry officer of his time. Such a man had appeared upon the scene, and soon we learned to utter with pride the name of — Custer.” [p. 130] and this: “Stars of the first magnitude did not appear often in the galaxy of military heroes. Custer was one of the few. The popular idea of Custer is a misconception. He was not a reckless commander. He was not regardless of human life. No man could have been more careful of the comfort and lives of his men. His heart was tender as that of a woman. He was kind to his subordinates, tolerant of their weaknesses, always ready to help and encourage them. He was brave as a lion, fought as few men fought, but it was from no love of it. Fighting was his business; and he knew that by that means alone could peace be conquered. He was brave, alert, untiring, a hero in battle, relentless in the pursuit of a beaten enemy, stubborn and full of resources on the retreat. His tragic death at the Little Big Horn crowned his career with a tragic interest that will not wane while history or tradition endure. Hundreds of brave men shed tears when they heard of it–men who had served under and learned to love him in the trying times of civil war. I have always believed that some of the real facts of the battle of the Little Big Horn were unknown. Probably the true version of the massacre will remain a sealed book until the dead are called upon to give up their secrets, though there are those who profess to believe that one man at least is still living who knows the real story and that some day he will tell it. Certain it is that Custer never would have rushed deliberately on destruction. If, for any reason, he had desired to end his own life, and that is inconceivable, he would not have involved his friends and those whose lives had been entrusted to his care in the final and terrible catastrophe. He was not a reckless commander or one who would plunge into battle with his eyes shut. He was cautious and wary, accustomed to reconnoiter carefully and measure the strength of an enemy as accurately as possible before attacking. More than once the Michigan brigade was saved from disaster by Custer’s caution. This may seem to many a novel–to some an erroneous estimate of Custer’s characteristics as a military man. But it is a true one. It is an opinion formed by one who had good opportunity to judge of him correctly. In one sense only is it a prejudiced view. It is the judgment of a friend and a loyal one; it is not that of an enemy or a rival. As such it is appreciative and it is just.” [pp. 131-132]

There are quite a few gems in this book, such as when Kidd gives us a warning regarding reports in the Official Records, saying, “commanding officers, when they write their official reports of a nigh rencounter [sic], are apt to draw on their imaginations for the facts.” [p. 257]  In a discussion about postwar correspondence he had with Gen. Wesley Merritt regarding the battle of Cedar Creek, Kidd tells us, “The distinguished cavalry officer replied, in a style that was bland, that he had ‘long since ceased to read fiction;’ that an officer one month would give his version of things which another officer in a subsequent number of the same magazine would stoutly contradict; and that he was heartily tired of the whole business.” [pp. 338-339]  Kidd sums up, “One must not be too sure of what he sees with his own eyes and hears with his own ears, unless he is backed by a cloud of witnesses.” [p. 339]  Kidd explains, “Official reports were oftentimes but hastily and imperfectly sketched amidst the hurry and bustle of breaking camp; or on the eve of battle, when the mind might be occupied with other things of immediate and pressing importance.  Sometimes they were perpared long afterwards, when it was as difficult to recall the exact sequence and order of events as it would be after the lapse of years.  Some of the ‘youngsters’ of those days failed to realize the value their reports would have in after years as the basis for making history.  Others were so unfortunate as to have them ‘lost in transit’ so that, although they were duly and truly prepared and forwarded through the official channels, they never found their way into the printed record.” [p. 340]

In discussing Maj. General Philip H. Sheridan, Kidd writes, “Sheridan believed that the cavalry corps should operate as a compact organization, a distinct entity, an integral constituent of the army, the same as the other corps.  He looked upon his relation to the general in command as being precisely the same as that of Hancock, Sedgwick or Warren, and insisted that orders to the cavalry should be given through the cavalry corps commander just as orders to the Second corps were given through General Hancock.  He could not bring himself to consent to be a mere staff officer dangling at the heels of General Meade, but conceived himself to be an actual commander, not in name only but in fact.” [p. 284]