The Confederates Assess the Battle of the Crater 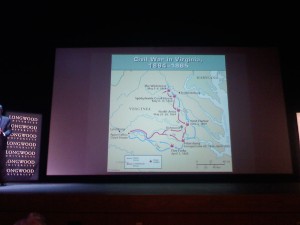 Kevin told us he was interested in the racial aspect of the Battle of the Crater and studied how confederate soldiers came to terms with the introduction of black soldiers in the Civil War.  The Crater marks the first time the Army of Northern Virginia will come face-to-face with black soldiers.

1500 black and white prisoners who had been captured at the Battle of the Crater were marched through the streets of Petersburg.  They were used to send a strong message to the rest of the Army of Northern Virginia, to the citizens of Petersburg, and to the rest of the confederacy.  As they were marched through the streets, many taunts and abuses were hurled at them such as “See the white and [n-word] equality soldiers.”  Women shouted, “And [n-word]s sleep in the same beds.”  Many historians haven’t given the Crater the attention it deserves, and this reflects the continued unease we have about race and the memory of the war.

The presence of the USCTs represented a shift in the Lincoln Administration’s goals and policies.  Despite the deeply engrained racism among Union white soldiers and the Northern white populace as a whole, tens of thousands of free blacks and formerly enslaved blacks enlisted to fight for their freedom and for the freedom of those left in bondage.  Military service gave them the opportunity to prove their manhood and win political and civil rights.  But the presence of a division of armed black soldiers outside a city with a large civilian population meant something very different to the soldiers of the Army of Northern Virginia.

For white southerners in the army and on the home front, their presence reinforced fears of social and political equality of blacks, images of race wars, and images and fears of miscegenation and the “defiling” of white women.  White southerners had harbored these fears in the Antebellum period in response to slave rebellions in the Caribbean and the constant threat of such rebellions, both real and imagined, in the American South.  The massacre of black troops at the Crater can be best understood as a reaction to long-standing fears of a slave insurrection and as the effect of a social, political, and economic hierarchy based on white supremacy.  Kevin told us the actions of the confederate soldiers at the crater, whether they were slaveholders or not, suggest they viewed the battle as nothing less than a slave rebellion.

In an attempt to break the siege, Union soldiers exploded 8,000 lbs. of explosives underneath a confederate salient in the early morning hours of July 30, 1864.  Ambrose Burnside’s IX Corps, which included Edward Ferrero’s division of USCTs, advanced with the goal of taking the heights of Blandford Cemetery overlooking Petersburg. 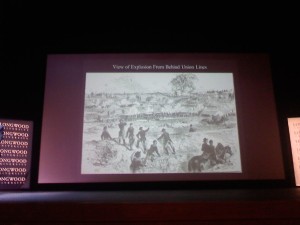 Nothing went right from the beginning.  The sight of the crater itself, 125 feet long, 50 feet wide, and 30 feet deep, cost them time as the men gaped at it and worked to uncover confederate soldiers who had been buried by the blast. 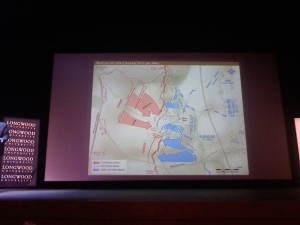 By 7AM three Union divisions were crammed inside the crater or were bogged down in the system of traverses and bombproofs extending outward.  A few scattered units managed to secure some ground beyond the crater, but confederate forces reacted and prevented a breakout. 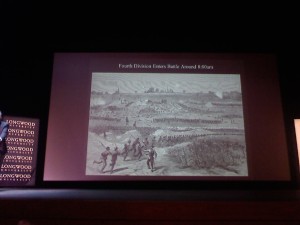 By the time Burnside ordered the 4th Division, the USCT division, in at 8AM, it was apparent to many the battle was lost.  A few regiments of the division managed to move past the crater to some advanced positions along with some scattered elements of the rest of the corps. 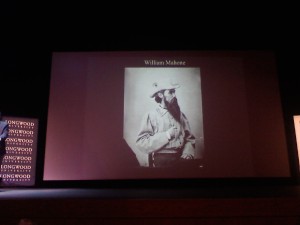 Any opportunity was quickly lost, as confederate general William Mahone arrived around 9AM with his division and quickly ordered the 800 Virginians from Brig. Gen. David Weisiger’s brigade into battle.  Two additional brigades of Mahone’s division were eventually ordered in before the fighting died down in the early afternoon and the salient was retaken.

The presence of the USCTs were a fundamental shift in the war for the men in the ANV.  After the battle, the confederates tried to make sense of this shift in their letters and diaries.  In doing so, they achieved a remarkable level of consensus.  It was shared by slaveholders and nonslaveholders alike and pointed to the responsibilities all white southerners assumed throughout the first half of the 19th Century in securing their communities from the threat of slave rebellions. 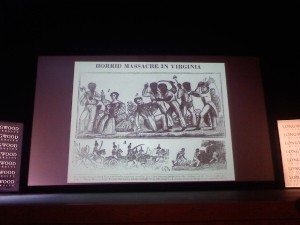 Nat Turner’s insurrection in Southampton County, Virginia, in August of 1831 led to the deaths of 60 white men, women, and children loomed large, and white southerners also remembered the failed attempts of Gabriel in 1801 in Richmond and in South Carolina by Denmark Vesey in 1823.  They also followed news from the West Indies which experienced violence. In the case of Nat Turner, white southerners claimed only outsiders could upset peace and paternalism that bound white southerners and slaves to each other.  The rebellion followed closely on the heels of the publication of William Lloyd Garrison’s abolitionist newspaper, The Liberator, and the formulation of an organized abolitionist movement in the North.  This provided an easy scapegoat. 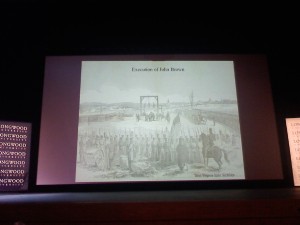 The sectional disputes of the 1840s and 1850s offered a continual reminder of the dangers posed by outside agitators and a hostile federal government.  Slave patrols and state laws meant to delineate racial boundaries and exercise greater control over the black population bound white southerners together ever more closely.  John Brown’s raid on Harper’s Ferry in October 1859 and the election of the nation’s first “Black Republican” as President convinced many in the south that secession was the only solution to the protection of slavery and their continued security.  The men who defended Petersburg that day not only understood the threat posed by black soldiers, but they also understood what needed to be done.  They were also aware of their own government’s policy–black soldiers and their white officers were to be treated as criminals, liable to enslavement and/or summary execution.  William Mahone’s brigade may have understood the danger armed blacks presented even more than other confederate units.  The five regiments of Mahone’s Virginia Brigade were from the immediate vicinity.  Mahone himself was born and raised in Southampton County, where Turner’s rebellion had taken place.  They were already engaged in heated combat when Ferrero’s division entered the battle.  For many of these soldiers, their first indication of the presence of black soldiers on the battlefield was the battle cry, “Remember Fort Pillow!”  Many confederate accounts include a reference to Fort Pillow, but it’s impossible to know how many actually heard such a battle cry given the noise and confusion of the battlefield.  Kevin told us the sight of these men alone would be enough to change the nature of the reaction of Lee’s men.  “It had the same effect upon our men that a red flag would have upon a bull was the way one South Carolinian described their reaction.  Many confederates relished the chance to share their experiences in meeting the black troops on the battlefield with their loved ones at home, and they did so vividly, describing how they bayoneted black soldiers and bashed in their skulls with the butts of their rifles.  The harsh descriptions helped to dehumanize black soldiers, and this dehumanization made it easier for them to go beyond what was allowed in war.  These descriptions helped reinforce the connection between the battlefield and the protection of the home front. 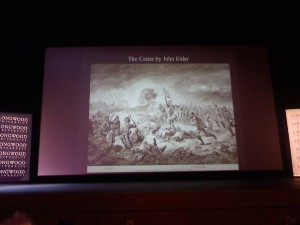 Once the salient was retaken, this confederate rage was difficult to bring under control.  Accounts by confederates written after the battle are filled with harsh descriptions of executions of surrendered black soldiers.  Many freely admitted participating in such executions.  One Mississippian wrote that most of the blacks were killed after the battle and some killed after they were taken to the rear.

The scale of violence against black soldiers mirrored the swift response against slave rebellions.  Kevin said, though, that the actions at the crater ought not to be understood simply as the result of collective rage, but rather what the confederate soldiers would understand as a measured response to achieve specific ends.  Kevin estimates that anywhere from 200 to 300 USCTs were executed.  One can compare this with the responses to slave rebellions elsewhere.

The brutal response to slave rebellions sent a strong message to slaves of who was in charge.  It also had the effect of draining remaining enthusiasm for more rebellion.  If we apply this to the Crater, we can move beyond heightened emotional responses found in soldier letters and better understand the intended consequences of the violence meted out to black soldiers.  It’s important to remember the men in the ANV were responsible for the defense of a civilian population.  For any remaining slaves in the area, what was done to the black soldiers sent a strong message that any attempt to follow in their footsteps will be dealt with in the harshest way possible.

As the result of fighting black soldiers, many confederates experienced a renewed sense of purpose and enthusiasm for fighting for the cause.  Edward Porter Alexander wrote, “The general feeling of the men toward their employment was very bitter.  The sympathy of the North for John Brown’s memory was taken for proof of a desire that our slaves should rise in a servile insurrection & massacre throughout the South, & the enlistment of Negro troops was regarded as advertisement of that desire & encouragement of that idea to the Negro.”  William Pegram wrote to his sister, “I had been hoping that the enemy would bring some negroes against this army.  I am convinced, since Saturday’s fight, that it has a splendid effect on our men.”  It served to remind Lee’s men what was at stake in the war–the overturning of their hierarchy of racial superiority.

The Richmond Examiner not only applauded the execution of black soldiers but called for more.  They encouraged Mahone to continue the practice in the future.  Newspapers portrayed Lee’s men as the only thing preventing the slaughter of innocent civilians at the hands of uncontrollable former slaves who had been duped into fighting against their former masters.

The parade of prisoners ordered by A. P. Hill represented control and submissiveness, and the army demonstrated its ability to continue to defend the residents of the city from the Union Army as well as from black soldiers.  While the racial mixing of soldiers in the parade served to humiliate the white captives, it also served as a reminder to the residents of Petersburg and the rest of the confederacy what was at stake.

On November 6, 1903 the streets of Petersburg were filled with confederate veterans and white Virginians from across the state to reenact the Battle of the Crater.  This impressed a young boy by the name of Douglas Southall Freeman who pledged to his father at the end of the day that he was going to write the story of these men.  This was an opportunity for the Civil War generation to pass on their stories of the Lost Cause to a new generation.  The veterans had little difficulty recalling the horror of the battle and the number of the enemy they had individually killed.  Even in 1910 some wrote there was still plenty of killing after black soldiers had laid down their arms.  The emotional accounts even forty years later clearly reflect a lingering bitterness at having to fight black soldiers during the war.  This contrasted sharply with the evolving public memory that steered clear of overt references to African-Americans.

Kevin did a wonderful job with his presentation.  He peppered it with a number of firsthand accounts of confederate soldiers both written at the time and written after the battle.  He even included accounts written by the veterans forty years after the event, around the time of the reenactment.  He demonstrated, I thought, great usage of primary sources.

The presentation came from his book, Remembering the Battle of the Crater:  War as Murder, which I recommend [Review will be forthcoming].