One self-appointed “defender of southern [read confederate] heritage” made the following claim:

[begin quote]I would say you are correct on the intent of the states to stay inn [sic] the Union. That action would be if the Federal government treated the states fairly and equal which it did not. This is proven by the Immediate Causes docs.

It is also true that the South wasn’t the only secession attempt, yet no law had never been passed to address that issue.

“Chief Justice Salmon Chase. No law had ever been passed that explicitly outlawed secession, the argument simply having been sidestepped by events. From the legal point of view it would have been difficult to accuse Mr. Davis of having committed any crime. Judge Chase felt there was no strong legal case against him for having been the president of the Confederacy, and added, with a surprising wisdom: “Lincoln wanted Jefferson Davis to escape, and he was right. His capture was a mistake. His trial will be a greater one. We cannot convict him of treason. Secession is settled. Let it stay settled.”

“The War Department presented its evidence for a treason trial against Davis to a famed jurist, Francis Lieber, for his analysis. Lieber pronounced ‘Davis will not be found guilty and we shall stand there completely beaten’.”

According to Mr. Conner, U.S. Attorney General James Speed appointed a renowned attorney, John J. Clifford, as his chief prosecutor. Clifford, after studying the government’s evidence against Davis, withdrew from the case. He said he had ‘grave doubts’ about it. Not to be undone, Speed then appointed Richard Henry Dana, a prominent maritime lawyer, to the case. Mr. Dana also withdrew. He said basically, that as long as the North had won a military victory over the South, they should just be satisfied with that.”

The Chase and Lieber quote are from “The Long Surrender”, 1985, by Burke Davis

“The Trails and Trail of Jefferson Davis,” a paper read before the Virginia Bar Association 1900, and published by this organization. [end quote]

Here is what Burke Davis wrote in The Long Surrender:

There is no citation to accompany this.  In fact, Burke Davis and Shelby Foote are the only two sources I’ve seen that actually claim this occurred.  I have yet to find any primary source that corroborates this claim.

As to Davis’ “source” as claimed by our friend: 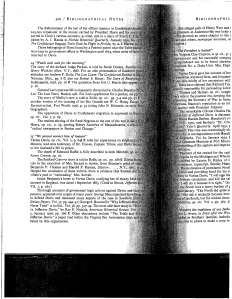 This is from a section of Bibliographical Notes giving where one may go for additional reading.  Nowhere does Davis say this is where he got the alleged quote.

Let’s look at those sources.  Volume 37 of the SHSP is here.  It includes the letter from George Shea, one of Davis’ lawyers, as Davis’ bibliographical note said and our incompetent friend wasn’t able to understand.  It does not contain the alleged quote.

Volume 38 of the SHSP is here.  The article in question is unsigned.  I couldn’t find anything in this volume that identifies the author of the article, which Davis and our erstwhile neoconfederate claims is written by George S. Boutwell, who was a Radical Republican Congressman from Massachusetts, Ulysses S. Grant’s Secretary of the Treasury, and later a Senator from Massachusetts.  It also does not contain the alleged quote.

I have  the Roy [not Ray] F. Nichols article [note that our incompetent neoconfederate friend is so clueless he didn’t recognize the typo].  The alleged quote is not in it.

“The Trials and Trial of Jefferson Davis,” by Charles M. Blackford, is here.  Blackford was a Virginia lawyer and had been a confederate officer during the Civil War.  The alleged quote is not in it.

So much for Davis’ “sources” for the alleged quote.

The quote is at odds with the record of Chase’s opinions on secession, such as his opinion in the Federal Case of Shortridge et al. v. Macon, 22 F. Cas. 20, 21 (C.C.D. N.C. 1867), Case No. 12,812, decided in June of 1867.  In that decision, Chase firmly stated the acts of secession were unlawful acts, that those who fought for the confederacy were traitors to the United States, and that the war was a rebellion.

Or his written opinion in the Supreme Court case of Texas v. White, 74 US 700, decided in April, 1869, in which he said secession was an unlawful act against the Constitution, and that the war was a rebellion.

“The doctrine of secession is a doctrine of treason, and practical secession is practical treason, seeking to give itself triumph by revolutionary violence.  The late rebellion was without any element of right or sanction of law.  The duration and magnitude of the war did not change its character. In some respects it was not unlike the insurrection of a county or other municipal subdivision of territory against the State to which it belongs. In such cases the State has inherently the right to use all the means necessary to put down the resistance to its authority, and restore peace, order, and obedience to law.  If need be, it has the right also to call on the government of the Union for the requisite aid to that end.  Whatever precautionary or penal measures the State may take when the insurrection is suppressed, the proposition would be a strange one to maintain, that while it lasted the county was not a part of the State, and hence was absolved from the duties, liabilities, and restrictions which would have been incumbent upon it if it had remained in its normal condition and relations. The power exercised in putting down the late rebellion is given expressly by the Constitution to Congress.  That body made the laws and the President executed them.  The granted power carried with it not only the right to use the requisite means, but it reached further and carried with it also the authority to guard against the renewal of the conflict, and to remedy the evils arising from it in so far as that could be effected by appropriate legislation.  At no time were the rebellious States out of the pale of the Union.  Their rights under the Constitution were suspended, but not destroyed.  Their constitutional duties and obligations were unaffected and remained the same.”  [80 US 646, 650-651]

Thus the alleged quotation is completely at odds with what we can verify was Chase’s position regarding secession.  In the absence of further evidence, we can’t take that quotation seriously.