Today I stopped by to see how things were going  with the Virginia Flaggers’ Welcome Sign to Racists, aka the I-95 confederate flag.

There’s a nice turnoff beside the trailer park and you can park almost right in front of the flag.  As you can see, there are some really good views available from the side of the road (outside the posted no trespassing area). 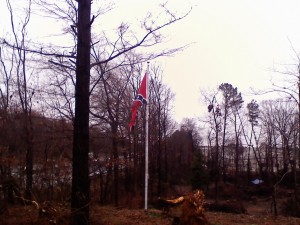 It doesn’t appear to be so easy to spot from the highway, though.  I took these two shots from the other side of the overpass.  As you can see, there hasn’t been any progress on clearing out any timber to make the flag visible from the highway. 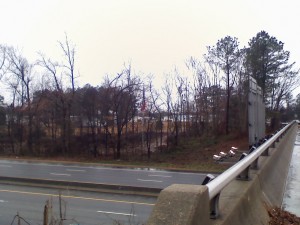 I was under the impression, from comments made elsewhere, that they had plans to clear out the timber by the end of November.  It’s been over a month since the excavator went missing–whether it was stolen or simply moved to avoid embarrassment we don’t know.  There seems to be have been a reasonable amount of time elapsed to acquire a replacement, if there was going to be any additional clearing done.

Perhaps we should file this under … Amusing.

← Is South Carolina Too Small to be an Insane Asylum?
Allen Guelzo and Mr. Lincoln →