Children of the Confederacy

I just heard about this group.  It’s a youth auxiliary of the United Daughters of the Confederacy and appears to be a service organization composed of children who are descendents of confederate soldiers.

They do some great work.  They raise money to fight cancer and to help wounded warriors.  They also raise money for St. Jude’s Children’s Hospital.  They have some scholarships they fund for students maintaining a good grade point average.  All in all, this is an outstanding organization that provides community service and leadership opportunities to young men and women.

So what’s my problem?  Their creed is based on historical lies.

It first came to my attention elsewhere with this photo of a plaque in Texas: 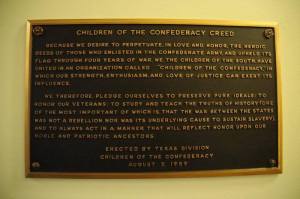 That wording, by the way, is still the current creed:

“Because we desire to perpetuate, in love and honor, the heroic deeds of those who enlisted in the Confederate Services, and upheld its flag during four years of war, we, the children of the South,  have united in an organization called the ‘Children of the Confederacy,’ in which our strength, enthusiasm and love of justice can exert its influence. We therefore pledge ourselves to preserve pure ideas: to honor the memory of our beloved Veterans; to study and teach the truths of history (one of the most important of which is, that the War Between the States was not a rebellion, nor was its underlying cause to sustain slavery). And always to act in a manner that will reflect honor upon our noble patriotic ancestors.”

And yes, the underlying cause was the determination on the part of the rebel states to sustain the institution of slavery.  There really is no argument about this among credible historians.  One cannot read the words of the secessionists in an honest manner without coming to this conclusion.

The “Historian’s Page” of their website is behind a password-protected wall, and they have a “Confederate Catechism” whose contents are not revealed at the website.  If it’s anything like this one, these children are being taught a bunch of lies about history.

Don’t get me wrong, this is an outstanding organization, and the kids are doing great things.  But it seems to me that telling these kids lies about history is not honoring their confederate ancestors.  The truth is the best way to honor them.  If they only had true history I’d be singing their praises to the moon.